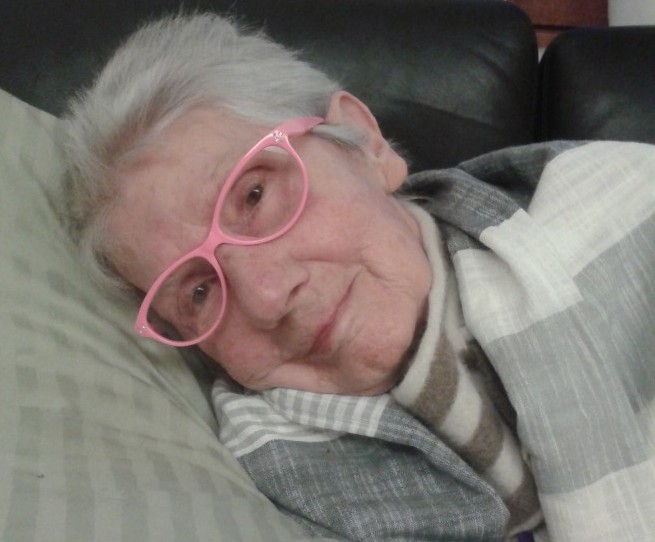 Dot was born in Latrobe, Pennsylvania, the youngest of 9 children of Italian immigrants Theresa and Antony.

After graduating from Latrobe High School, Dot commuted to Pittsburg to attend the Louise Salinger School of Fashion and Design. She graduated with excellent sewing skills, and went to work for a dressmaker in Pittsburg.

While sitting with friends in a Latrobe soda shop, Dot met John Vlossak, back from the war and a student at St. Vincent College. They married in 1950, then moved to Detroit, Michigan where Mark and Terry were born. The family relocated to Green Bay, Wisconsin, then to Appleton.

With John acting at Attic Theatre in the summers, Dot naturally put her excellent sewing skills to good use by volunteering in the costume shop. There she met her soon-to-be best friend Anne Glasner. Dot and Anne made an amazing construction and design team for countless shows at Attic Theatre.

Dot developed an interest in cooking after taking a class from French chef Madame Kuony. A natural, her culinary talents blossomed quickly. Soon, she and John were hosting dinner parties not only for their friends, but for lonely Lawrence students who could not go home during the Holidays.

Dot was known for her keen fashion sense and elegant style. She made it a point to buy high quality, but on sale, and proudly stated the price she actually paid for expensive clothing, snagging many incredible deals to add to her wardrobe.

Dot was an intelligent, curious woman, and read voraciously. She loved art, music (especially Jazz), dance, theatre, travelling, good food, wine and stimulating conversation, her family and many friends. Dot and John travelled extensively in the U.S. and Europe, visited Australia and sailed the Caribbean. They were active members of “One Nighters”, a theatre club, from 1988 to 2010.

Dot enrolled in ballet classes as a form of exercise at Makaroff School of Ballet shortly after moving to Appleton and continued into her sixties. When Children's Ballet Theatre was created, Dot served on it's board for many years.

In 1970, Dot became an elementary school aide in the Appleton School System, and worked in that capacity until 1993. With her extensive background in theatre, Dot directed many student productions, constructing both costumes, sets and even puppets.

When Swedish graduate students needed a place to stay while working and studying in Wisconsin, Dot offered her home. Birgitte and Ingalill became lifelong friends.

With both children off at school, Dot lent one of her empty bedrooms to a young friend, Meg Finn, who was transferring to UW-Oshkosh. Dot, John and Meg got along so well, that what started out as a simple living arrangement became a deep and abiding relationship. When Meg married John B., Dot and John gave her away. Meg and John's children called them “Grandma Dot” and “Grandpa John”, and Meg became an unofficial daughter of the Vlossaks.

There will be no funeral service or viewing. A private Celebration of Life is planned.

In lieu of flowers, friends are encouraged to donate to Attic Chamber Theatre or Makaroff Youth Ballet in Dot's name.