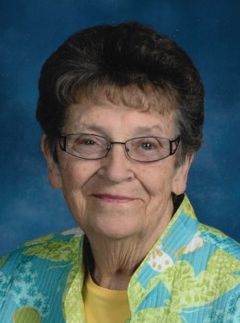 Doralee passed away after a short illness on December 19, 2017 in Bloomington, IL where she had recently moved to be close to family.

Doralee was born in Dale, WI on February 28, 1930 to Walter and Lorena Selle. She graduated from Winnebago Lutheran Academy in Fond du Lac, WI. On August 6, 1949, she married Roland Radichel at St. Paul Lutheran Church in Dale. He preceded her in death on May 26, 2009. They were married for 59 years.

Doralee and Roland lived in Menasha until 1960, when they moved their family to Arizona. In 1974 they moved to Chula Vista, CA. Doralee retired from the Burger King Corporation and started her second career as Director of the Chamber of Commerce of San Ysidro, CA on the US/Mexico border. Doralee was also very involved in her church and was instrumental in starting a pre-school program at Concordia Lutheran Church where she and Roland were members for over 40 years. Doralee’s hobbies were doing whatever needed to done for any organization with which she was involved.

Doralee was known for her interest in people. She loved to meet people and question them about their lives and interests. Encouraging young people was one of her great delights.

Doralee’s sense of adventure increased with age. Within the last 5 years of her life, she was able to ride in a helicopter, go parasailing, swim with a dolphin, go snorkeling, take a paraglide ride, and go ziplining.

Doralee is survived by her children: Sandra (Al) Roseman of Bloomington, IL; Catherine (Howard) Tanner of Wauwatosa, WI; and Dan (Nicci) Radichel of Surprise, AZ. She is further survived by 3 grandchildren: Danae (Billy) Loss of Chula Vista, CA; Nicolas (Cristina) Radichel of Surprise, AZ; and Sebastien Tanner of Wauwatosa. Additionally, 4 great-grandchildren: Tommy and Tori Radichel; Joey and Danny Loss. She is also survived by siblings: Raymond (Helen) Selle of Neenah, Melvin (Lorraine) Selle of Appleton, and Rosalie (David) Bunnow of Appleton, as well as many nieces and nephews.

Doralee was preceded in death by her parents; her husband, Roland; her brother-in-law Ken Radichel; and sister-in-law Sandy Radichel.

Memorials may be made to the Building Fund of Concordia Church 1695 Discovery Falls Drive, Chula Vista, CA 91915.