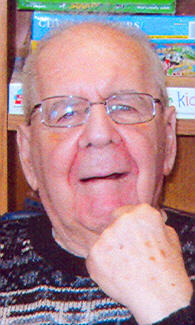 Donald “Pete” Ryan, age 83, formerly of Escanaba, MI., lived at Colony Oaks Care Center in Appleton, WI. He was born July 12, 1927 in Escanaba, Michigan, the son of the late Edward and Edna (Hazen) Ryan. Pete was married to Marjorie “Elaine” Hamlin for 59 years. She preceded him in death on April 12, 2009. Pete worked at the railroad for many years and retired working at OSF St. Francis Hospital in Escanaba. Pete and Elaine were long time members of Immanuel Lutheran Church in Escanaba and were also known for their love of dancing.

Pete is preceded in death by his sisters: Jean, Eleanor and Marge; and brothers: Frank, Edward, John and Herbert.