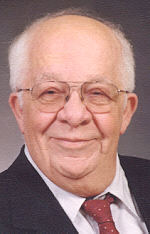 Age 81, passed away at Appleton Medical Center on Sunday, February 3, 2008, with his loving wife of 59 years and family by his side. He was born in Kaukauna on July 13, 1926, the son of the late Royal Stegeman and Wilma Stegeman-Kent. Donald enlisted in the Navy when he was 17 years old, and was proud to have served on the U.S.S. Isherwood DD-520 in the Pacific during WWII. On June 26, 1948 he married Julia Vosters at St. John Catholic Church, Little Chute. He was employed by Thilmanys for over 42 years, retiring in 1988. Don enjoyed spending time with his family; square dancing, traveling, shopping, and time at his cottage at Lake Winnebago. He was especially proud of being the Secretary-Treasurer of the U.S.S Isherwood DD-520 Association, and organized many reunions for the organization throughout the United States.

The funeral service will be at 12:00 p.m. on Friday, February 8, 2008 at the Star of Hope Chapel, Highland Memorial Park, 3131 N. Richmond St., Appleton, with Pastor Samuel Garbi officiating, with a military honor service to follow conducted by the William Verhagen Post #60, Kimberly. Friends will be received at the chapel on Friday from 10:00 a.m. until the time of the service. Entombment will be in the Highland Memorial Park Mausoleum.

The family extends a special thank you to the staff of the I.C.U and 2 South Cardiology at Appleton Medical Center; especially Will, Randy, Travis, Kelly, Amy and Ryan for their compassionate care.

A memorial fund in Don's name will be established.