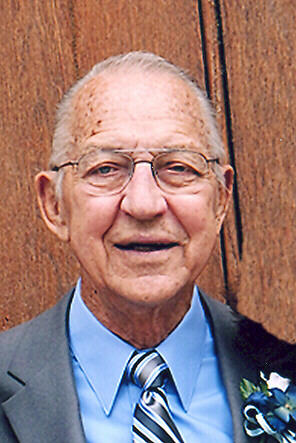 Donald B. Pawer, age 82, of Appleton passed away suddenly on Monday, February 1, 2010 at his home due to complications from a 50 year battle with Type I Juvenile Diabetes. Don was born on July 10, 1927 in Appleton, the son of the late Jacob and Anna (Winkel) Pawer. Don served in the U.S. Navy from 1945 to 1947. On December 21, 1952 he married Patricia Lee Neil in Elgin, IL; she preceded him in death on April 27, 2005. In 1951, he graduated from Lawrence University where he earned 12 athletic letters for his success in football, basketball, and track and field. Don and Pat settled in Appleton, in the home he built, where they raised their family.
Don taught middle school mathematics in the Appleton Public School system for 35 ½ years and touched the lives of countless school children. Don coached football, basketball and track. Don was a lifetime member of First English Lutheran Church, an avid hunter, fisherman and gardener. He enjoyed spending time with his “ROMEO” club, the “Basketball Gang” and many other friends and relatives. More than anything, Don loved spending time with his wife before her passing, his four daughters, sons-in-law, and his three grandchildren.
Don will be dearly missed by his four daughters and their families: Vicki (Terry) Brennan, Parrish FL, Terri Pawer, Appleton, WI, Donna (Jim) Ernst, Appleton, WI and Carol (Ed) Sanders, Fremont, WI: three grandchildren: Kristen (Matthew) Schmitz, Keri Ernst (special friend Dean Rose) and Michael Ernst: a sister Eyvonne (Pawer) Geise, Brookfield, WI: a brother-in-law and sister-in-law Joseph and Carol Neil, Pompano Beach, FL: a special cousin and his wife Dr. James and Renate Campbell, Beaver Dam, WI; many nieces and nephews, extended family and friends, and his golden retriever Allie.
Don was preceded in death by his parents, his wife Pat, his brother Jacob Pawer Jr., his brothers-in-law David Geise and Del Neil and his sister-in-law Jeanne Neil.
Funeral services for Don will be held Friday February 5, 2010 at the Wichmann Tri-County Chapel on South Oneida Street in Appleton at 10:00 a.m. Friends may call from 4:00 – 8:00 p.m. on Thursday February 4, 2010 and Friday from 9:00 a.m. until the time of the service. A memorial fund has been established in Don's name to support the efforts of juvenile diabetes research.
Wichmann Funeral Home
Tri-County Chapel
3212 S. Oneida St.
Appleton, WI
920-832-9905