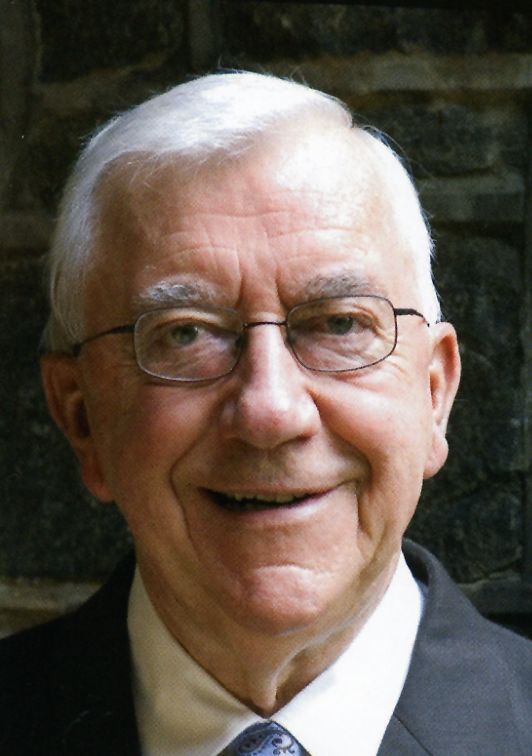 He was born on April 9, 1929 to Nicholas and Louise (Casper) Theyerl in Fond du Lac, WI, where he was raised with his 5 older siblings. He graduated from Fond du Lac High School in 1948.

After high school, he pitched semiprofessional baseball. He was thrilled to be scouted by and have a try out for the NY Yankees. He proudly served in Korea from 1951 to 1953 as a corporal in combat in the First Cavalry division of the U.S. Army.

Thanks to the GI bill, he returned to Wisconsin to pursue his dream of teaching. He graduated from UW-Oshkosh in 1958 with a BS, double majoring in Secondary Education and English. He has shared many treasured memories of his college days, where he met a group of lifetime friends; and the love of his life, Ellen Mae Christenson, a brilliant beauty from Appleton. They were married on October 27, 1956 at Saint Joseph Catholic Church in Appleton.

In 1958, they moved to Appleton where Mac began his 34-year distinguished teaching career at Appleton High School ‚Äì West. During his tenure at “West”, he taught English, Social Studies, and Geography and was the faculty editor and advisor for the “Patterns of Stardust”. He also volunteered as the faculty advisor for graduation for many years, a position he enjoyed immensely. He was honored with the HH Helble Educators Award in 1985-86 and Mielke Award for Secondary Educator of the Year for Appleton Area School District 1990-1991. His passion for teaching was evident. He had a positive impact on so many ‚Äì teachers and students alike. He was deeply touched by past student comments and compliments ‚Äì stories of lives changed and career paths forged.

Mac and Ellen raised their 5 children in Appleton. They created a close-knit family who enjoyed spending time together: camping, cross-country skiing, Christmas, Door County, family European trip, Pewaukee Lake, Rehoboth Beach, DE. They instilled in us the importance of family, work ethic, integrity, nature and the environment. After Ellen passed away in 2002, Dad remained our rock.

He was fortunate to spend the past 3 years with the second love of his life and “new best friend”, Carol Fischer, who brought so much love, joy, and laughter to his life, as he so often expressed.

Mac was the consummate gentleman; kind, strong, sweet and loyal and was fiercely proud of his children and grandchildren. He was always encouraging and supportive of their dreams. He had a quiet strength and empathy that were evident in everything he did and every interaction he had. His humor is legendary. He loved all things Bavarian, feeding the birds, tending to his beautiful yard, and telling stories. He was a member of the American Legion Post 38 ‚ÄìAppleton where he served on the scholarship committee. He enjoyed his monthly lunches with his college/”Korea” buddies.

He is loved, adored and will be dearly missed by his 5 loving and devoted children, daughters Dr. Kay Theyerl (fianc√©, Tom Lee) and Susan of Appleton, Mary (Abkeba Seeney and children Moshea and Larow) and Julia of Wilmington, DE; and son, David and his cherished grandchildren, Hannah and Jack, all of Pewaukee, WI. He will be deeply missed by his older sisters Genevieve and Lucine who raised him after his mother died young; and his big brother Ed (Pat), his sister-in-law Geraldine, and his many treasured nieces and nephews and their families. He has been loved and will be dearly missed by Carol Fischer and her 3 daughters and their families who have become part of our family.

He was loved by all as evidenced by the attendance and outpouring at his 80th surprise birthday party ‚Äì he called it the second best day of his life!

He was preceded in death by his parents, Nicholas and Louise Theyerl, his brothers, Joseph “Petey” and Orville and his wife, Ellen. Before Ellen died, she wrote this tribute – Ode to Mac:
As soft as a waterfall, yet as strong as the rock over which it cascades, his unconditional love locks me in security and peace. Though his commitment is constant, he considers every day a bonus.

Funeral liturgy for Mac will be held at 1 PM on Saturday, December 22, 2012 at ST. JOSEPH CATHOLIC CHURCH, 410 W. Lawrence St, with Fr. Jim Leary, O.F.M. Cap. officiating services. Hours of visitation will be held at church from 11 AM until the time of service. Military honors will be presented immediately following the service. Mac will be laid to rest privately at St. Joseph Cemetery. In loving remembrance, a scholarship fund will be established in Mac's name. Online condolences may be expressed at www.wichmannfargo.com.

A special thank you to the first responders, Appleton fire department and rescue squad, Appleton Police department, and Deputy Coroner for their professional and compassionate attention during this most difficult situation for our family.