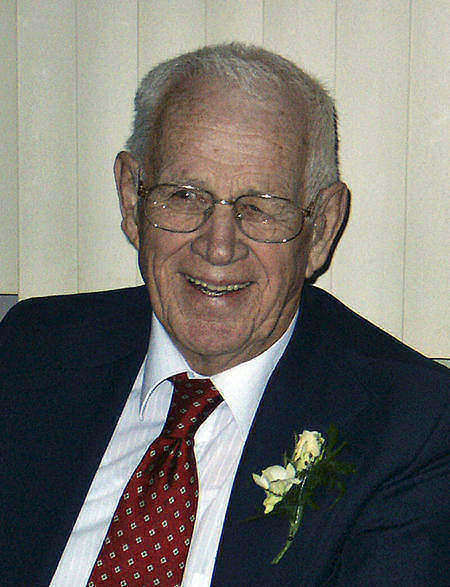 Donald M. Johnson, 89, of Kimberly, passed away peacefully Wednesday, September 29, 2010, with his family by his side after a short illness. Don was born on March 15, 1921, in Algoma, Wisconsin to the late John and Agnes (Eland) Johnson. After graduating from Algoma High School in 1938, Don attended UW-Madison for one year. While working as a milk tester, he met his future wife, Marguerite Dorn, at her parents' farm in Greenville. Following the bombing of Pearl Harbor, Don felt the call to duty, and enlisted in the Army Air Corps, proudly serving until his discharge in December 1945. While in service, Don married Marge on November 18, 1944, and they enjoyed nearly 66 years together before his death. Upon leaving the Army, Don began working at Riverside Paper, retiring after 40 years in 1986. Don took great pride in putting his millwright skills to work for family and friends, always ready to lend a helping hand.

The family would like to express a special thank-you to all the doctors and nurses at Theda Clark Medical Center, and staff at Rennes Nursing Home and The Renaissance. Your compassion and support during this difficult time have been comforting and greatly appreciated.

A memorial Mass for Donald will be held on Saturday, October 2, 2010 at 11:00 AM at HOLY SPIRIT PARISH (600 E. Kimberly Ave, Kimberly) with Fr. David Beaudry officiating. Friends may call on Saturday from 9:00 AM until the time of services at the Church.

In lieu of flowers, a memorial is being established in Don's name.