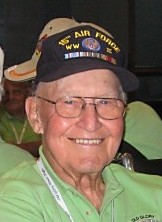 In 1991, Don married the second love of his life, Ginger Welhouse and enjoyed 21 years of happiness. Throughout their years together they enjoyed their dog Charlie, family gatherings, traveling, gardening, Lake Park Swim & Fitness Club and then in the later years baking cookies and pies.

Don graduated from Kimberly High School in 1941. He then joined the U.S. Army Air Corp where he served in Italy from 1941 to 1945 as a captain on a B-24 bomber. He was a navigator bombardier and flew in 27 missions receiving numerous medals. After proudly serving his country, he was employed by Kimberly-Clark as an electrician. He followed this endeavor as an employee of Lawrence University retiring as the Physical Plant Director. He enjoyed many years at the family cottage at Lake Poygan and playing golf in his earlier years. He will be remembered for using his “handyman” talents to help his family and friends. On August 31st, 2010 Don thoroughly enjoyed attending the Air Force Honor Flight in Washington D.C.

Don's family would like to extend a special thank you to the caring staff at St. Elizabeth Hospital, especially Dr. Balm, Dr. Jack Meyer, Dr. Gregory and the nursing and CNA staff on 2nd Floor Cardiac Unit and 4th Floor South.

A mass of Christian Burial will be held on Thursday, March 8th, 2012 at St. Paul Catholic Church in Combined Locks at 6:00 p.m. with Fr. Andy officiating. Visitation will be from 4:00 p.m. until the time of service. Burial will be in St. Mary Cemetery, Kaukauna.