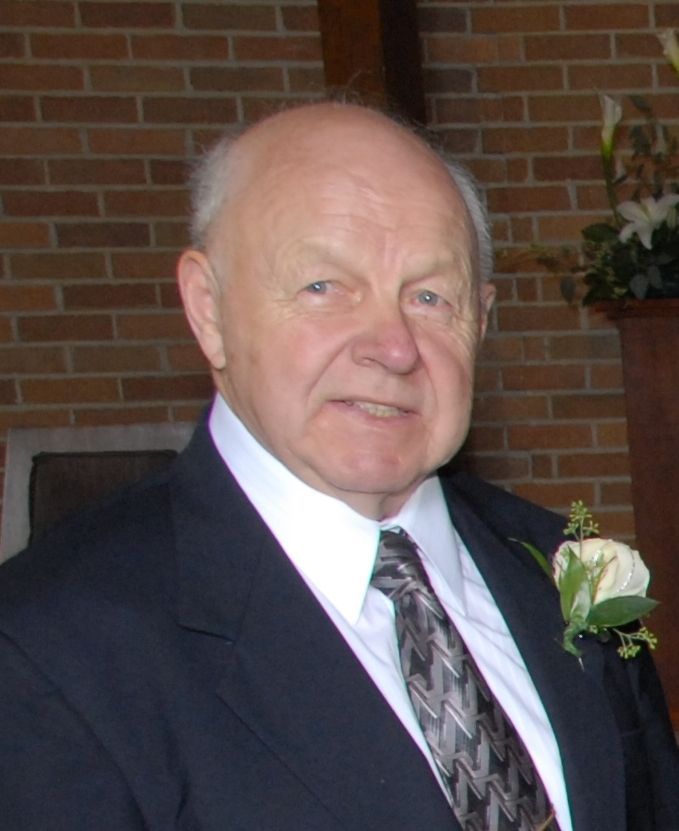 Donald Harrison Huth, age 86, went to his heavenly home on Wednesday, August 12, 2015. He was born on February 26, 1929 in Appleton, Wisconsin, to Ernest and Elsie (Stepel) Huth. He attended St. Paul's grade school and Appleton West High School. Don proudly served his country in the U.S. Marine Corps. He married Vivian Prochnow on October 2, 1949 in New London, Wisconsin.
Don was employed by Morning Glory Dairy as a driver salesman for thirty-five years. He was also the owner and manager of Huth Apartments. Don liked woodworking, gardening, and was known as “Mr. Fix It.” He was most proud of his children and grandchildren and their achievements. No matter how inclement the weather, he and Vivian attended every graduation and award function that the kids were involved in. He delighted in his great-grandchildren and looked forward to their visits.
Don was a lifelong member of St. Paul Ev. Lutheran Church in Appleton, where he served on a variety of committees. He served on the Board of Education when his children were enrolled there, and often could be seen working on projects or the landscaping there.
Don is survived by his wife Vivian Huth; his three children: Linda (Nick) Frederick of North Mankato, MN, Timothy (Susan) Huth of Appleton, and Steven (Tammy) Huth of Janesville. He is further survived by his grandchildren: Jennifer (Brandon) Terrell of St. Paul, MN, Tracy Frederick Corcoran of North Mankato, MN, Shalene Huth of Dubai, Edmund Huth of Appleton, Elizabeth (Benjamin) Daniel of Peoria, AZ, and Michael Huth of N. Hollywood, CA. He is also survived by his great-grandchildren: Alex and Stella Terrell, Kaleb and Katelyn Corcoran, and Aiden and Hailey Daniel; sister Carol Dalke; and sisters-in-law Sylvia Huth of Appleton, Marilyn (Richard) Oertel, Carol (Richard) Stern, and Dorothy Linberg; and brothers-in-law Leslie (Mary Lou) Prochnow and Jack Algiers.
He was preceded in death by his parents; his sisters Arlene (Merlin) Wolf, Margie (Norbert) Hardy, Lois (Paul) Riehl, Lorraine (Wesley) Warnke; brother Elton Huth; brothers-in-law Kenneth, Donald, and David Prochnow, Ronald Dalke; and sisters-in-law Karen (Lee) Never and Arline Algiers.
A time of visitation will be held at the WICHMANN FUNERAL HOME, 537 N. Superior Street, Appleton, on Thursday, August 20, 2015 from 4:00 p.m. until 7:00 p.m. The funeral service for Don will be held at 11:00 a.m. on Friday, August 21, 2015 at ST. PAUL EV. LUTHERAN CHURCH, 302 N. Morrison Street, Appleton, with Rev. Peter Walther officiating. An additional time of visitation will be held at the church from 10:00 a.m. until the time of the service. Online condolences may be offered at www.wichmannfargo.com.