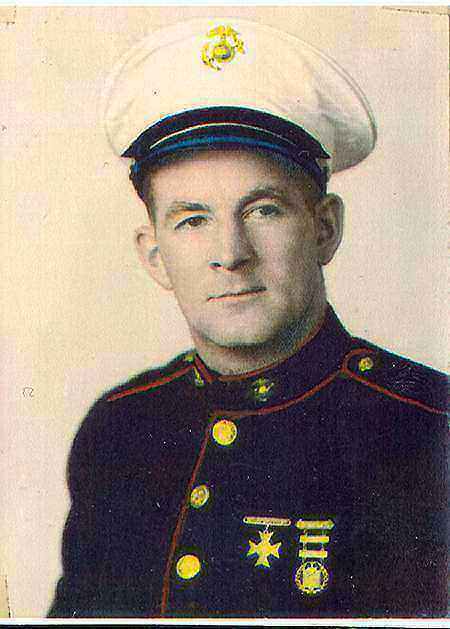 Age 92, died August 21, 2005, at the Wisconsin Veterans Home, King, WI, with his daughters keeping watch. Don was born, July 2, 1913, the 5th child of William and Caroline (Riehl) Wunderlich . He was raised on the family farm in the town of Ellington along with sisters, Myrtle, Ethel, Gladys, Marion and Gloria; and brothers Waldo (Spud), William (Billy) and Lyle. Spud is the only surviving sibling. Don was working the farm when Pearl Harbor was bombed. His sense of duty and country compelled him to enlist in the United States Marine Corps. On January 12, 1942, Don became a member of the 2nd Marine Division, 10th Regiment, 4th Battalion. Artillery was his specialty. Don served in the South and Central Pacific Theaters including the battles for Saipan, Tarawa and Tinian. On Saipan, during a night of horrific shelling, the Japanese hit an ammunition dump within 75 yards of Don. He dived into a foxhole, clothes blown off and made a pact with God: Let me live through the night and I will marry my sweetheart, Eunice, and raise as many as six girls.
On February 6, 1945, Don married Eunice Behnke. They settled in Appleton and began their family of daughters: Susan Wunderlich, Minneapolis; Barbara (Randy) Witt, Madison; Donna (Mac) Meiners, Juneau, Alaska; Sandra (John Millhouse) Wunderlich, Oshkosh; Roxanne (Jon) Zuleger, Appleton; and Lynn (Jeff Baldwin) Wunderlich, Placerville, California. Don was a dedicated and devoted husband and father. He taught his daughters to trust in God, be responsible and to honor their Father and Mother. He took great pride in each daughter‚Äôs accomplishments. Don was dearly loved by his daughters and he knew it.
After the war, Don trained as a meat-cutter and began working first at Dorn‚Äôs, then Krambo‚Äôs, where he became manager, and finally Kroger‚Äôs. True to his German heritage, he worked hard and long. He was a good provider for his family. Born with a green thumb, Don was an avid gardener. He grew raspberries, vegetables and many flowers. He was particularly passionate about his roses, which, under his care, were magnificent. His tomatoes reached the roof and his roses were so thick they had the appearance of a hedge. His grass was weed free and the greenest in the neighborhood. Passersby would stop to admire his beautiful yard.
Don loved babies. He was blessed with eight grandchildren: Julie, Stephen and Jennifer Witt; Kevin, Don and Tom Meiners; and Madeline and Billy Zuleger. Don was an attentive and affectionate grandfather. He spent time with his grandchildren playing cribbage and other card games, reading books, fishing, boating and being a comfortable belly to snooze on.
Don was a longtime Packer fan – from the early days of passing the hat to pay the team, to proud season ticket holder. He loved fishing with his buddy Milt Shultz and brother Lyle. He was a league bowler and a golfer. A regular church attendee, Don taught Sunday School and served on the Church Council.
Don was a compassionate caregiver to his wife, Eunice, after she suffered a tragic aneurysm in 1996. For the next two years, Don tended to her care and comfort daily. She died in his arms on February 1, 1999.
Throughout his adult life, Don had numerous health issues and surgeries. Dealing with pain became a constant. Despite these problems, Don‚Äôs will to live remained strong as did his faith in God. He had a full and productive life. Semper Fi!
Funeral services for Don will be at 11:00 a.m. Friday, August 26, 2005, at ZION LUTHERAN CHURCH, 912 North Oneida Street, with Rev. Larry Matthews officiating. Interment will follow at Highland Memorial Park Cemetery, and military honors will be presented at the graveside. Friends may call from 4:00 p.m. until 7:00 p.m. Thursday at the funeral home, and again from 10:00 a.m. Friday until the time of services at the church. A memorial fund is being established in his name.

Special thanks and heartfelt gratitude to Mark Regnier, Pharmacologist, Appleton VA Clinic; the nurses and staff at King; Thedacare Hospice; and all family and friends.
Dear Dad ‚Äì Thank you for all you‚Äôve done for us. You taught us well. You were blessed with a long life and gave us many memories to cherish. You will always be with us.