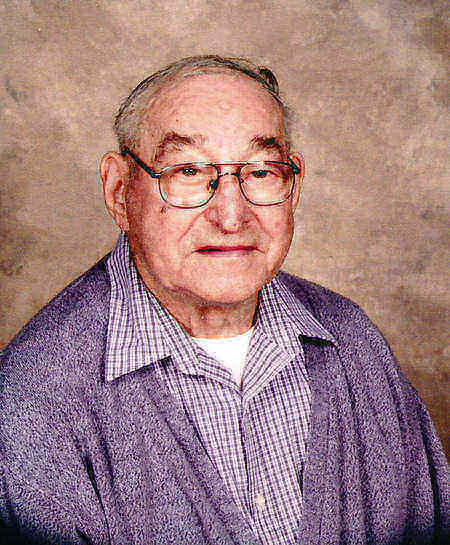 Donald E. Schultz, age 87, went to heaven on Thursday, November 21. Don had a deep and abiding faith. He had exceptional knowledge of the Bible, was a hard worker and a loving and caring family man.
Don was born on April 20, 1926 in Greenville, Wisconsin. He was the second of nine children born to William and Ella (Volkman) Schultz. He was baptized and confirmed at Immanuel Lutheran Church in Greenville. Don worked at the gas station in Greenville, Fox Tractor Company until it closed and at A & E Equipment.
On June 16, 1956 he married Elaine Lohrenz at Center Emmanuel United Methodist Church. They were happily married for 42 years and raised three daughters, Deb, Sue and Sally. Family was important to Don and there were many family outings and vacations. He especially enjoyed several trips to North Dakota. Don loved spending time with his grandchildren, Brandon, Josh, and Jessica. A sadness in his life was when Elaine passed away on April 1, 1999.
Don was a member of Center Emmanuel United Methodist Church for over 50 years. He was a long time Sunday School teacher for the adult class. In addition, he was church treasurer for many years. He and Elaine were involved in adult fellowship group, Don played dartball and attended men's breakfast.
Don enjoyed gardening and had a huge garden where he spent many hours. Don and Brandon fed birds together and took care of his apple orchard. Family reunions were a special time for him. He liked talking to people. Animals were a big part of Don's life. The family had pet dogs and cats. He helped his father-in-law milk cows and fed the many barn cats. Don enjoyed the simple things in life, Sunday dinners with the family, jigsaw puzzles, talking about farming, spending time with family and friends, and reading-especially his Bible, newspapers and farming magazines.
Don is survived by his daughters, Deb (Rich Ralph), Sue, and Sally of Hortonville; grandchildren Brandon, Josh, and Jessica; sisters Dorothy Defferding, Caroline Schroeder, Bernice (Don) Vanderloop, Barbara Herzfeldt, Mary Ellen (Earl) Schroeder, Janice (Don) Schroeder, Lynn (Bob) Spaulding and brother Gerald (Loretta); brother-in-law Bob (Donna) Lohrenz; many cousins; nieces; nephews and friends. He was preceeded in death by his wife Elaine; parents; brother-in-laws Keith Defferding, Wally Schroeder, and Clarence Herzfeldt.
Funeral services will be held on Tuesday November 26, 2013 at 11:00 am at Center Emmanuel United Methodist Church, N3896 Hample Road, Black Creek (Town of Center) with Rev. Loretta Waegli officiating. Visitation will be on Monday November 25, 2013 at Wichmann Funeral Home, Superior Street Location from 4:00 to 7:00 pm. Visitation will continue Tuesday morning at the church from 10:00 to 11:00 am. Interment will be at Ellington Union Cemetery.
Don was a special man and will be missed by all who knew him.