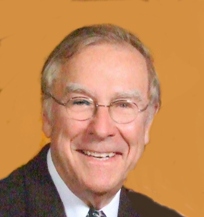 Donald C. Monyette died on Saturday evening, October 9, 2010 at St. Vincent Hospital in Green Bay, following a brief illness. Don was born in Appleton on September 16, 1935, son of the late Clarence and Esther (Helser) Monyette. Don graduated from St. Joseph Grade School, Appleton West High School, and the University of Wisconsin – Madison. On May 10, 1957, he married the former Lavern Pritzl at Sacred Heart Church in Appleton; she survives. Don served his country as a member of the United States Navy and is a Korean War veteran, having served most of his active duty aboard the carrier USS Valley Forge, CVS45.

Don and Lavern loved to travel, and visited many states including Hawaii and Alaska. They also visited Canada, Aruba, Japan, Australia, New Zealand, Ireland, Scotland, England, Netherlands, Belgium, Luxemburg, France, Italy, Germany, and Czechoslovakia. Don was also interested in genealogy and found and met many relatives in Luxemburg, Switzerland, Belgium, and France. Don worked most of his career with Fort Howard / James River / Georgia Pacific in Green Bay and Chicago, until he retired in 1999. He was a member of the Quarter Century Club there and was a member of the elite President's Club at Fort Howard. He was also a member of the American Legion, Am-Vets, and the Catholic Order of Foresters.

Don loved to sing, and was a member of the Barbershop Harmony Society for many years. He sang with the Appleton Fox Valleyaires, Green Bay's Baylander Chorus, and the Pride of the Valley Chorus. Don also sang baritone with the Four Clips barbershop quartet for almost twenty years, as well as in the church choir at St. Louis Parish in Dyckesville, where he shared his talent for many masses and many funerals.

A memorial service for Don will be held at 10:30 AM on Friday, October 15, 2010, at ST. JOSEPH CATHOLIC CHURCH, 410 W. Lawrence Street in Appleton with Fr. Jim Leary officiating. Don will buried with full military honors on the Monyette plot at St. Joseph Cemetery in Appleton. Friends may call directly at the church on Friday morning from 9:00 AM until the time of the service.