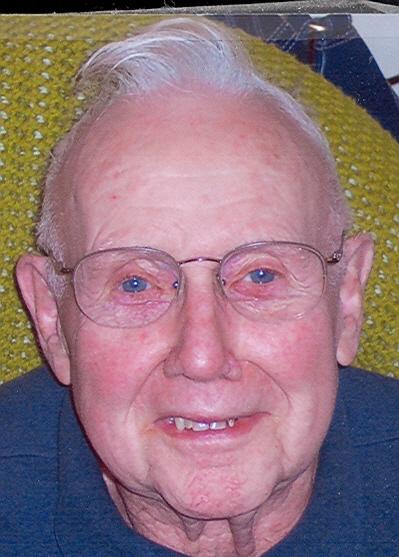 Donald Burnet Singler was welcomed into everlasting life by our Lord on October 27, 2009. He was born on August 23, 1920 in Iron River, Michigan to John F. and Lyda (Kimber) Singler. He was raised in Iron River, MI and received a degree in Electrical Engineering from the University of Michigan. He served our country in the Army in Germany during World War II. He married the love of his life, Elizabeth “Bette” Munch in Iron Mountain, MI on November 23, 1950 and moved to Appleton, WI. He was employed as a purchasing agent for Wisconsin Electric (now WE Energies) from where he retired after 32 years. He was a charter member and active member of St. Bernard Parish, Appleton. Don enjoyed the Packers, golfing, traveling, making things for his family and watching and/or listening to all sports (often more than one game at a time). Above everything he loved God, his wife and his family. Don is survived by his wife of nearly 59 years, Bette; sons, Donald Michael (Debra) Singler, Plymouth, MN, Fredrick (Sharon) Singler, Skanaeateles, NY; daughter, Sue (Terry) Woelfel, Appleton; grandchildren: Nathaniel Singler, Tiffany and Nicole Woelfel, Madison and Brett Singler. He also is survived by sisters: Nora Mae Angeli, Shirley Lownik; sister-in-law, Shirley Munch; brother-in-law, Art Munch and numerous nieces, nephews and friends. Don was preceded in death by his parents; brother, Jack, brothers-in-law, Libero Angeli, John Lownik, Henry Munch, Raymond Munch and sister-in-law, Betty Munch. A Memorial Mass for Don will be held on Saturday, November 7, 2009 at 11:00 a.m. at ST. BERNARD CATHOLIC CHURCH, 1617 W. Pine St., Appleton with Fr. Dennis Ryan officiating. Family and friends may visit at the church on Saturday from 9:00 a.m. until the time of the mass. In lieu of flowers, memorials should be directed to the memorial fund.

The Singler family would like to express sincere appreciation to Diane, Gerilou and all of his other caregivers at Brewster Village for the love and compassion they have shown Dad these past few years.
Wichmann Funeral Home
537 N. Superior St.
Appleton 739-1231