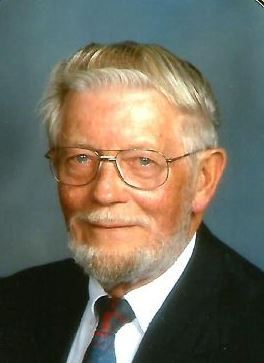 Donald A. Juers of Appleton, WI left this life peacefully holding his daughters' hands at Cherry Meadows Hospice on January 3, 2015. Don was born on December 2, 1925 in Lake City, MN. He was the son of Albert and Margaret Juers. Don worked on the family farm after graduating from Lake City High School in 1943. He took care of his sisters and brother as his parents died very young. Later he attended the University of Minnesota where he met his wife Muriel, the love of his life. They were married September 9, 1950. Don graduated with a Bachelor of Business Administration degree in December of 1950.
Don started working as an accountant at Ernst and Ernst, Minneapolis Moline Company, and Hamm Brewing Company in the Minneapolis-St. Paul, MN area. In 1960 the family moved to Shawano, WI where he worked at Consolidated Badger (now AMPI) and retired as Director of Finance and Treasurer. During his professional career he was active in the WI Society of Certified Public Accountants and the National Association of Accountants, serving as President from 1971-1972. He published two professional articles on accounting and enjoyed preparing taxes for clients throughout his career.
Don was elected to the Shawano County School Board for many years and served as President for several years. As an active and faithful church member in the Shawano United Methodist Church and at Zion United Methodist Church in Door County, he served on various church committees, attended annual conference sessions, and volunteered as Church Treasurer. His wife and daughters were very active in Girl Scouts which he supported in many ways. He served as a member of the Masonic Lodge in Shawano and assisted in the planning for Mason Woods Retirement Community.
In 1992, Don travelled to Latvia, Eastern Europe, as a volunteer to help dairy plant workers improve and implement dairy business processes.
Throughout his life, Don fished and fished and fished! Many happy days were spent in his boat on Lake Michigan reeling in the “big one”. He made many excursions out west to fly fish in the mountains of Colorado, Utah, and Wyoming with his grandsons, cousin, friends, and on his own. He also enjoyed hunting, cross country skiing, was an avid reader, and a talented wood worker. Among his woodworking creations are furniture, a chess set, a grandfather clock, a cradle, cross country skis, snow shoes, a violin and his beloved cabin in Baileys Harbor, WI built when he was 72 years old.
Don and Muriel were blessed with three daughters who were raised to love camping, canoeing, music, and reading. Don and his wife Muriel taught their daughters many valuable lessons, the most important one being unconditional love.
After Muriel's death in 1994, Don sold the family home in Shawano and moved to Baileys Harbor, Door County once his cabin was completed. His move to Door County was a natural transition as the family had previously spent many summer vacations and weekends camping there together. As a resident, Don became very active volunteering at the Ridges Sanctuary Nature Center. He built and repaired wildlife trails and center projects. At the age of 88, Don was still one of the best trap shooters at the gun club where he enjoyed the sport immensely.
Throughout his life, Don was a loving husband, father, grandpa, and great-grandpa (aka Papa Don). He was a loyal friend to many, and always treated everyone with kindness and respect.
Don will be sadly missed by daughters: Elizabeth (John) Skinner of Apopka, FL, Ellen (Greg) Bryant of Appleton, WI and Dee (Jim) Hapke of Ames, IA; grandchildren: Amanda Skinner (Ryan Byrd), Erik Skinner, Amy Wockenfus, Kristin (Adrian) Gontea, Jon (fiancée Jesse Harper) Hapke, Peter Hapke, Sam Hapke, and Hannah Hapke; great granddaughters: Lucia Gontea, Natalie Gontea, and Karina Byrd; sister Verna Ringler of California, many nieces, nephews and caring friends. He was preceded in death by his wife Muriel, parents Albert and Margaret Juers, a sister Leona, and a brother Linley.
A memorial service will be held at Emmanuel United Methodist Church at 733 College Avenue, Appleton, WI 54911 on Saturday, January 10, 2015 at 11 am. Family and friends may gather at the church from 10 am until the service begins. Wichmann Funeral Home, 537 N. Superior Street, Appleton, WI 54911 is assisting the family.