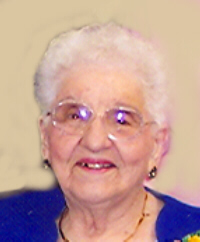 Dolores Schoening was called to Jesus' side on Sunday morning, July 27, 2008 at the age of 91. Dolores was born in Boyd, Wisconsin on September 29, 1916, daughter of the late Robert and Amelia (Bennen) Casper. On November 18, 1933, she married LeRoy Schoening, Sr.; he preceded her in death in February of 1983. During their younger years, the couple lived and raised their children in New London, where Dolores worked at Campbell's and also as the manager of the youth store for Cristy's. When the family moved to Appleton in 1961, she began work as a buyer and department manager for Gloudeman's, which later became McCain's. Dolores was a longtime and faithful member of St. Matthew Ev. Lutheran Church, its Ladies Aid and Dorcas Society, and volunteered her time at the YMCA, the Bargain Garden, and helped with the autumn apples at Fox Valley Lutheran High School.

The Christian Funeral for Dolores will be held at 11:00 AM on Wednesday, July 30, 2008 at ST. MATTHEW EV. LUTHERAN CHURCH, 129 S. Mason Street in Appleton with Rev. Paul T. Schuler officiating. Entombment will be at Highland Memorial Park. Friends may call at the funeral home on Tuesday from 6:00 PM until 8:00 PM and again at the church on Wednesday morning from 9:30 AM until the hour of the service. The family has suggested that memorial contributions be directed to St. Matthew Ev. Lutheran Church.