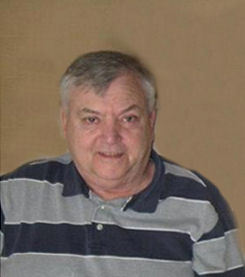 Dennis Batten, age 66, of Menasha, passed away with his family by his side on Saturday, November 16, 2013. He was born on May 27, 1947, in Waupaca, the son of the late Melvin “Jack” and Bertha (Moore) Batten. Dennis graduated from Waupaca High School in 1965 and attended UW – Stevens Point participating in football at both schools. On June 28, 1969, Dennis married the love of his life Janie Neuendank at St. Florian's Catholic Church in Hatley. His employment began at Appleton Papers for 37 years, and followed with him retiring from Milltown Papers. Dennis enjoyed fishing with his brothers-in-law, DuWayne and Roy, and hunting with his brothers. He looked forward to summers on Pelican Lake and catching a Packer, Brewer or Badger game. His family meant the world to him, and he loved participating in activities with his family and attending his grandchildren's sporting events.
Dennis is survived by his loving wife of 44 years, Janie; children: Patrick (Katie) Batten, Janel Batten and Amanda (Ryan) Wettengel; grandchildren: Tyler, Owen, Molly and Josh Batten; siblings: Gary (Bette) Batten and Bernice Vandensen; sister-in-law, Jeanette Batten; mother-in-law, Dorothy Neuendank; sisters-in-law: Karen Ostrowski and Marietta (DuWayne) Steinke; brother-in-law, Jerome Neuendank; and goddaughter, Cher Davis; and special friend and neighbor, Joe Wilharms. He is further survived by nieces, nephews, other relatives and friends.
Dennis was preceded in death by his brothers: Ellsworth “Dewey” Batten and Benny Batten; brothers-in-law: Bob Vandensen and Roy Ostrowski; and father-in-law, Ernie Neuendank.
The funeral service for Dennis will be held at 11:00 am on Thursday, November 21, 2013 at Wichmann Funeral Home Tri-County Chapel in Menasha. Chaplain Jim Frank will be officiating. Inurnment will take place at St. Florian's Catholic Cemetery in Hatley. A time of visitation will be held on Wednesday from 4:00 pm until 7:00 pm and again on Thursday morning from 9:30 am until the time of service. In lieu of flowers, a memorial fund has been established in his name. Online condolences can be offered at www.wichmannfargo.com.
The family would like extend a sincere thank you to the physicians and nurses at Theda Clark Medical Center, Appleton Medical Center, the Martha Siekman Cancer Center and ThedaCare at Home Hospice.