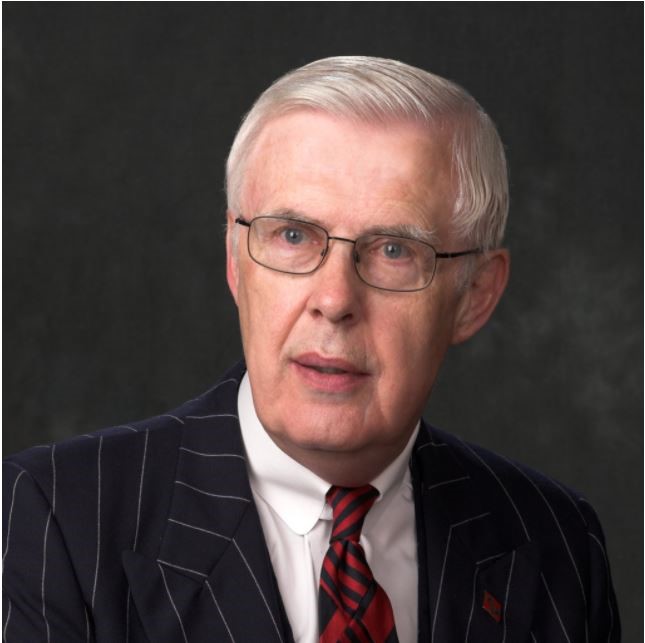 Dennis “Whitey” M. Wydeven passed away peacefully on Monday, October 4, 2021, at his most recent home, Brewster Village.  He was born on August 27, 1939, to Paul and Ruby (Belling) Wydeven.  He graduated from Kimberly High School in 1957, and upon graduating, enlisted in the U.S. Marine Corps, where he proudly served for two years.  When he returned, he attended UW-Oshkosh and after that, the University of Wisconsin Law School where he was a member of Law Review.

Whitey married the love of his life, Suzanne Deloria on July 21, 1962.  They lived in Sun Prairie where she taught kindergarten while he attended law school.  Upon his graduation, they returned to Kimberly to start a family.  He practiced on his own in Kimberly briefly before joining his friends, Neil McCarty and Irving Curry, and helped grow the firm of McCarty, Curry, Wydeven, Peeters & Haak. The firm is now known as McCarty Law, LLP.

Whitey was an active member of his community and assisted countless Kimberly sports supporting organizations, including helping to found the Kimberly Booster Club, where he served as a longtime board member.  He went to as many Kimberly football and basketball games as he could, and when he could no longer attend, he would watch them on his TV or computer.  Whitey also frequently said he was the most undeserving, but most grateful member of the Kimberly Athletic Hall of Fame.

Whitey was also a die-hard Badger fan.  He and Suzie religiously attended all home football and basketball games, including going to see the Badgers win the Rose Bowl in 2000.

Whitey was a longtime member of the St. Elizabeth Foundation board, the Kimberly Kiwanis Club, and proudly donated over 25 gallons of blood during his lifetime.

During his practice, Whitey helped many families with their estate planning and elder law issues.  He took great pleasure in helping families ensure their affairs were in order.  He also loved saying he was blessed to practice with his son, Reg, and his best friend, Irv.  On numerous occasions in church, the grocery store and even in Disney World, clients would stop him to thank him for all he had done.

But the true love and source of pride of Whitey’s life was his family.  He loved being together with them, especially his grandkids, and was so proud of their accomplishments.  He faithfully attended countless concerts, recitals, and games of theirs.  He also loved his son- and daughter-in-law like his own.

Whitey’s favorite saying was that you’re only young once, but you can be immature forever.  He loved cars, and was always on the lot whenever Gustman’s received the new year’s models.  He lived for Christmas and routinely went overboard with decorations and gifts.

Whitey is survived by his wife of 59 years, Suzie; his daughter, Nicole (Mike) Hochholzer and their children, Katrina (who is in her first year at UW Law School!) and Nate; his son, Reg (Mary) Wydeven and their children, Ebben and Matthew; two brothers, Donald (Janet Porter) Wydeven, and Charles (Leslie) Wydeven; a sister, Dorothy (Donald) Yahr; a brother-in-law, William Schmit; dear friend, Rhonda Hochholzer; and his work family, Gregg (Mary Clare) Curry and their sons, Michael (Cassie), Thomas (Sarah), and Steven (Hailey), and their children.  He is further survived by many nieces and nephews; Suzie’s many cousins and their families, who he grew very close to; and countless friends, neighbors and colleagues.

Visitation for Whitey will be held at Holy Spirit Parish, at their Kimberly location, from 9:00 to 12:00 Noon on Friday, October 15, 2021, with a mass to follow.  Following the mass, please join the family for a luncheon at Liberty Hall for steak sandwiches and cherry pie, Whitey’s favorites.

The family would like to express its heartfelt appreciation to the loving and caring staff at Brewster Village, especially Jennifer, where he spent the last four-and-a-half months.  They truly made him feel like he was in his new home.

Because Whitey’s family members all have allergies, in lieu of flowers, please consider making a contribution to the The Multiple System Atrophy Coalition (which is what Whitey suffered from), to the UW Law School through the University of Wisconsin Foundation, or to the Kimberly Booster Club.