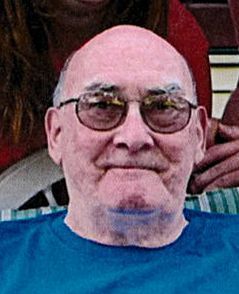 Dennis Lee Hintze, age 77, of Menasha, passed away on the evening of Sunday, December 18, 2016, surrounded by the love of his family, at ThedaCare Regional Medical Center-Neenah. Dennis was born on February 4, 1939 in Oshkosh, one of 11 children born to Walter and Cecilia (Montabon) Hintze. At the age of 17, Dennis joined the United States Navy. After his service to our country he met and fell in love with Ruth Ann Resch. They married on November 4, 1961. They shared 28 years of marriage before her death in 1990. Dennis worked as a Millwright with Kimberly Clark until his retirement at age 59.
Dennis was an avid sports fan; he enjoyed softball and bowling. He also enjoyed watching the Cubs. He will always be remembered as being his children's and grandchildren's biggest fan.
Dennis is survived by his five children: Chris (fiancé Sherean Kolthoff) Hintze, Lynn Hintze, Russ (Margie) Hintze, Sandy (Jon) Pettit, and David (Karin) Hintze; and his seven grandchildren: Jennifer, Michael, Andrew, Aaron, Abbey, Jake and Sam. He is further survived by his siblings: Eileen Bronson, Neil Hintze, Joanne Schlichting and Judy(James) Wollanak; brothers and sisters-in-law: Carol Hintze, Mary lla Hintze Kenneth(Mary) Resch, Barbara Resch, Gerald (Patricia) Resch; in-laws; as well as many, many nieces, nephews, other relatives and friends including his special friend Linda Weigand. He was preceded in death by his parents, his wife: Ruth Ann; his siblings: Milton Hintze, Eugene(Joyce) Hintze, Gerald Hintze, Keith(Carol)Hintze , Suzanne(Richard)Ludwig, Glorianne Hintze Mattison; and in-laws: Clarence(Margaret) Resch, Jim Bronson, Gabe Schlichting, Rita Hintze, Clarice(Bernard) Odeans, Larry Resch.
The Funeral service for Dennis will be held at 4:30 p.m. on Friday, December 23, 2016 at the WICHMANN FUNERAL HOME LAEMMRICH CHAPEL, 312 Milwaukee St. Menasha. A time of visitation will be held from 2:00 p.m. until the time of service. Online condolences may be expressed at www.wichmannfargo.com.