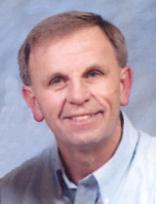 Milis, Dennis C.
Photo
Of Kaukauna, age 63, a loving and devoted husband and father died peacefully at his home on Tuesday, October 18, 2005 with his family and guardian angel at his side. He was born at home October 3, 1942 in Washington Township, Shawano County to the late Walter and Viola (Beilfuss) Milis. Dennis graduated from Kaukauna High School in 1960. On July 3, 1965 at Holy Cross Catholic Church he married Donna Nault. Dennis served his apprenticeship and graduated as a journeyman machinist from Giddings and Lewis where he worked for 23 years. Following their closing he went to work as a supervisor at Metal Products until his retirement on May 6, 2006 due to illness. He enjoyed antiquing, gardening and took great pride in restoring furniture.

The past year was filled with many celebrations. The thoughtful owners of Metal Products, Al and Sue Tetzlaff, threw a wonderful retirement party for Dennis on May 13. It was a gathering of many friends and family whom Dennis had touched and taught during his working career. Another special day for Dennis was May 22, the day he was confirmed as a member of Holy Cross Church, the parish community he had come to love dearly. On July 3 he and Donna celebrated their 40th wedding anniversary by having their marriage blessed by Father Jack Mullarkey followed by a gathering of friends and family at their home. This, indeed, was very special.

The funeral liturgy celebrating his life will be held at 4:00 pm on Friday, October 21, 2005 at Holy Cross Catholic Church, 309 Desnoyer St., Kaukauna with Father Jack Mullarkey officiating. The family will receive friends at the Church from 1:00 p.m. until the time of service. Inurnment will take place at 10:30 a.m. Saturday, October 22, at Holy Cross Cemetery. A memorial fund has been established in Dennis‚Äô name.

Special thanks to Dr. John Swanson and ThedaCare Hospice for their care and compassion, as well as our many friends and family who journeyed with him.