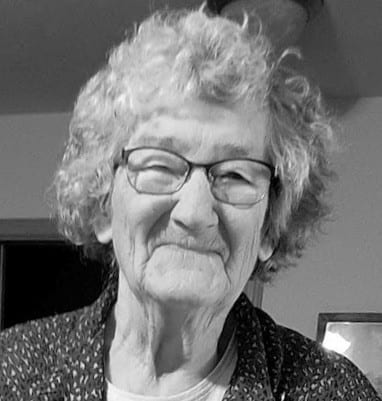 Della A. Milbach, 93, passed away as a result of Covid complications on the afternoon of December 11, 2020. She was born in Park Falls, Wisconsin on December 6, 1927 to the late Patrick and Teresa (Schwin) Kilawee. Della was an eternal optimist who trusted in God and found solace in nature. She may not have won the award for longevity(Margaret was 96), but she did win the category of last Wisconsin Kilawee sibling standing. Mom was quick to tell you that she was the “last of 11” and that her father always told her she needed to be tough as the middle child. She would need to “fight them off” from both sides and she did so with love. She is preceded in death by her parents Patrick and Teresa, husband William Milbach, and siblings; Margaret Kilawee, Fr. Ivo (Jack) Kilawee, Sr. Marie Kilawee, Patricia (Dean) Ekstrom, Martin (Lois) Kilawee, Charles Kilawee, Joseph (Barbara) Kilawee, Frank Kilawee, Richard Kilawee, and Victoria (Clarence, Sully) Sullivan. She is survived by her sister in law Patricia Kilawee; sister in law Francis Milbach, brother in law Daniel (Marlene) Milbach; and children Maureen E. Milbach and Terence M. Milbach; and many nieces, nephews, whom she loved dearly; great-nieces and nephews, and cousins.

Della learned early that life is an adventure and to love the place she was living at the time as home. A few years after her birth, the Kilawees moved to Madawaska, Maine where her father Patrick worked for the paper companies. He trained people in how to make paper in France, England and other parts of the world sharing his fascination for people and travel with his children. During the Great Depression they moved to Lewiston, Maine where she developed her gardening skill as the one who would pull weeds not vegetables. Upon moving to Kaukauna in the early 1940’s, she brought with her an Eastern accent that she claimed made the boys love her and the girls hate her. Our Dad, Bill, loved the accent and her so much that after WWII they got married at Holy Cross Catholic Church in Kaukauna then moved to Rhinelander. After several years, their Fox Valley roots called them back to Kaukauna where eventually her children Maureen and Terry were born. A late teaching career took her to Appleton where she stayed until her retirement. Della held many interesting jobs in her lifetime, but her last careers were her favorite. She was an elementary teacher for 25 years, the last 14 of which were spent as a Kindergarten teacher at St. Thomas More School where she had started the program. After retiring from teaching, she worked at Northwest Fabrics and Crafts where she was in seamstress and crafter heaven. She won awards for selling Baby-lock sewing machines and sergers, created models for the store, and also taught classes. When her daughter left for grad school in 1994, she sold the house and moved to her favorite place on the planet (besides Maine), Sturgeon Bay, WI. Being close to the water was important to Della, so much so that she found another retirement job at Whitefish Dunes State Park where it was part of her daily routine to walk the dunes until she was 75. Della eventually conceded to move back to Appleton at the age of 85 via stroke rehab at Bellin. She re-learned how to walk and live in her apartment and it wasn’t until the last 15 months of her life that circumstances brought her to assisted living.

Della would be pleased if you would knit a pair of mittens or a hat for a child, plant a tree, or simply offer kindness to people no matter their background, ability, or rank in life.

In lieu of flowers, donations may be made to the Friends of Whitefish Dunes State Park or the Agape of Appleton “Live Your Dream” Project. You may also plant a tree in her memory at  https://www.alivingtribute.org/#:~:text=Plant%20a%20Tree%20in%20Memory,plan%20for%20decades%20to%20come.

Thank you to Compassus Hospice, her staff at Care Partners, Lakeland Care, Maureen’s friends, and everyone who helped her manage the last 7 years.  As she said often, “It’s hell to get old,” and, “there’s not much we can do about that.”

A Christian rite of burial will be held at Wichmann Funeral Home, 537 N. Superior St. Appleton, on Monday, December 21st at 4:00 pm.

Please wear a little pink or green in Della’s honor and to brighten the day.

Catholic Masses will be said for Della at St. Thomas More and Holy Spirit parishes in Spring of 2021.

A Celebration of Life will be announced at a later date.