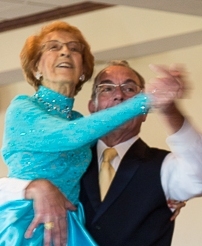 Born in Stephensvillle, Wisconsin, she graduated from Oshkosh Teachers College and taught world geography for over 20 years at James Madison Junior High School in Appleton.

After retirement, her passion for dance led her to Adagio Dance Studio (TC Dance Club) where she enthusiastically participated in dancing competitions, accumulating awards and making friends with dancers of all ages and walks of life. Her Adagio family truly became an integral part of her life. Tributes coming in from dancer friends around the country demonstrate how many lives she touched and their great love for her. During her 100th Birthday Celebration (September 2013) DeLila gave one of her final performances, dancing a waltz to the music of “This is My Wish for You” with her long time teacher, mentor, friend, and dance partner, Terry Irwin.

DeLila was a member of St Mary's Church, an active participant in the Odd Lots Investment Club, and the Heritage Reading Group until the time of her death. She enjoyed sharing the cottage she and Rolly built on Archibald Lake with her children, grandchildren and their many friends. She was especially pleased she was able to paddle about the lake in her kayak until recently.

DeLila was predeceased by her husband Rolland Nock, her sister Bernice Grey and her brother Harold Komp. She is survived by her daughters: Barbara Nock Pickthall (Tom) of Missouri City Texas, Elizabeth Nock of Townsend Wisconsin , and Susan Nock (Gregory Dyer) of New York City. She is also survived by grandchildren: Tom Pickthall, Jr., Linda Pickthall Crawford, and Michelle Pickthall Kareis; and great-grandchildren Savannah Pickthall , Anna Kareis, Kevin Kareis, and Barbara Kareis. In addition to her immediate family, DeLila is survived by her special “children of the heart” – Connie and Peter Roop, Terry Irwin, and Bob McKenny.

The family would like to give a special thanks to the nursing team members on the 5th floor of Appleton Medical Center, as well as Dr. David Conrad, who provided loving care to DeLila and the entire family during her hospitalization. We would also like to thank each of her doctors and their staffs who treated our mother with compassion, love and humor.

For those who wish to make memorial donations in her name, the family suggests contributions be made to the St. Joseph's Food Program, 1465 Opportunity Way, Menasha, WI 54952 or to a favorite charity of your choice. Online condolences may be offered at www.wichmannfargo.com.

A Gathering to remember DeLila will be held on Saturday, February 1, 2014 from 2:00 PM until 4:00 PM in Peabody Hall at the Heritage/Peabody complex. (2600 S. Heritage Woods Drive. Please use the Rosewood Glen entrance at Peabody.)

The family welcomes all of DeLila's friends to this celebration and looks forward to seeing you there.