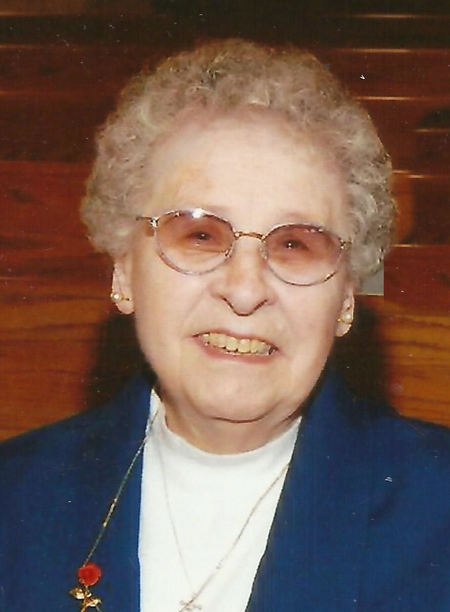 Delia Margaret (Spierings) Van Roy, age 91, passed away on July 29, 2013 to join her husband and family. She was born on February 23, 1922 in Little Chute to John and Anna (Evers) Spierings. Delia grew up on a farm and attended school through eighth grade. After that, she worked as a nanny and also worked at St Elizabeth's Hospital.

Delia was united in marriage to Harry Van Roy at St John's Catholic Church in Little Chute on May 7, 1942. They worked a dairy farm in the town of Buchanan. They were members of Holy Angels/Holy Name/Holy Spirit Parish since the time of their marriage. They raised a family of 10 children. Delia was devoted to her family. She was thrifty and had a strong work ethic. She made many loaves of bread and did a lot of canning. Every bed was made every day. Even though she did not drive, she had the ability to accomplish all family functions like shopping, church and visiting family and friends. She was the potato peeling winner at family reunions. She made blankets for her grandchildren and the church. She helped prepare many school and funeral luncheons. Delia and Harry enjoyed square dancing, bowling and playing sheephead with family and friends. When their children were grown, they did some traveling. In October of 2010 Delia and Harry moved into American Grand Assisted Living Suites.

Visitation is on Friday, August 2, 2013 at 9:30am at HOLY SPIRIT PARISH – DARBOY (W2796 County Rd. KK) which will be followed by Mass at 11:30am celebrating Delia's life with Father Bob Kollath officiating. Burial will follow Mass.
In lieu of flowers, a memorial fund has been established for Holy Spirit Parish and the Holy Spirit Mission Ladies. Online condolences may be expressed at www.wichmannfargo.com.
The family extends a sincere thank you to the staff of American Grand Assisted Living Suites for the care and compassion shown to Mom.