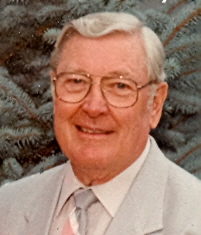 Dean Schopp, of Darboy, formerly of Green Lake, passed away peacefully with his family at his side on Saturday, July 18, 2009. Dean, lover of God, family, nature and his fellow man, was born in Hammond, Indiana on April 25, 1920 to Edward Walter and Bertha Irene (deMalo) Schopp. On September 19, 1942, he married the girl next door and later the love of his life, Esther Lorrene Turner in LaGrange, Illinois. Dean served his country during WWII in the U.S. Navy. He was a member of St. Katharine Drexel – St. Aloysius, Knights of Columbus and active contributor at the Covenant House and Boys Town. Dean enjoyed his Cessna 170 and was involved with the Flying Farmers and EAA. He was always looking for someone to join him on the golf course. Esther and Dean enjoyed traveling in their RV.

The funeral service for Dean will be held at 10:30 am on Tuesday, July 21, 2009 at FARGO FUNERAL HOME with Fr. Walter Vogel officiating. Burial will take place at St. Mary's Catholic Cemtery, Elm Grove. The visitation will be held on Tuesday from 9:30 to 10:30 am. In lieu of flowers, memorials are appreciated to Covenant House or Boys Town.