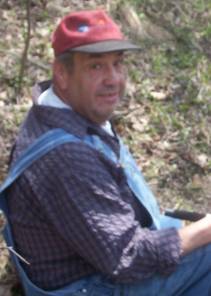 Age 63, passed away Friday, March 9, 2007, at Cherry Meadows.
David was born April 17, 1943, in Appleton, to Ruth (Rohloff) Scott Smith and the late Robert Scott. He was the oldest of three brothers and a sister. David married his wife Carol on September 29, 1962, and had two children and four grandchildren.
David enjoyed the simple life-fishing, farming, gardening, and being with his family
and his dog, Mac. David was a wonderful man and is going to be missed by his family.

David is survived by his wife, Carol Scott, his children, David, Jr. (Julie) Scott, Brillion, and Virginia (Thomas) Ritchie, Clintonville; his grandchildren, Katie and Autumn Scott, and Ashley and Allyssa Ritchie; his mother, Ruth Smith; his brothers and sister, James (Sharon) Scott and Robert (Brenda) Scott, and Susan (Gerald) Bedor; and his good friend, Robert Hanson (Idiot).
He was preceded in death by his father, Robert, and a brother, Steven Scott.

Private family services for David will be held.

It‚Äôs not about losing the memories, but the strength to let go.

I‚ÄôM NOT GONE
Don‚Äôt cry for me, now that I am free.
Just look around anywhere, and that is where I‚Äôll be.
For I am the daylight, when the sun starts to rise.
I‚Äôm the bright rainbow, you see with your eyes.
I‚Äôm the tiny raindrops, that sprinkle in the wind.
I‚Äôll always be here with you, for there really is no end.
I‚Äôm the dew that‚Äôs on the ground, and the quietness all around.
Yes, I am so very happy, with this new life I have found.
I‚Äôm the peaceful summer breeze, that flows softly through the trees.
I‚Äôm the bluebird in the sky, that sings with such ease.
Yes, I am so very happy, so happy to be free.
Understand my family and friends and don‚Äôt you cry for me.
Author unknown