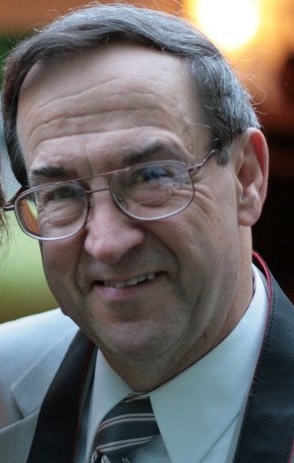 Surrounded by the love of family and friends, David Hartman passed away on Wednesday, September 16, 2015 after a courageous two-year battle with brain cancer, which he fought with determination, patience, and an inexhaustible sense of humor. David was born July 5, 1947 to Gilbert and Gwendolyn (Ringer) Hartman in Chippewa Falls, Wisconsin. He grew up in Bloomer, Wisconsin, the oldest of five children, and graduated from Bloomer High School in 1965. A talented artist, he studied commercial art and graduated from Madison Area Technical College, after which he moved to the Fox Valley to work in the art department of Wisconsin Tissue Mills. He later worked as a graphic artist for Mills Fleet Farm, RR Donnelly and Hoffmaster. In 1969, he married Barbara Laemmrich and they had two sons, Steve and Mark. On March 8, 1980, he married Christine Manlove, and they had two children, Brian and Megan. David was a simple man at heart, whose kindness was appreciated by many and who was always generous with his time and talents. He enjoyed sports of all kinds, actively participating in figure skating, softball, and golf, and watching the Brewers, Badgers and Packers whenever possible. He loved the many weekends spent at the family cottage on Berry Lake, particularly when fishing was involved. He was a prolific artist, skilled at drawing, painting, and photography; he produced countless portraits, landscapes, and other wonderful works of art, as well as contributing significantly to the scenic artwork and theatrical photography of Appleton North Theatre productions for many years. Dave loved to tell jokes (often accompanied by good-natured groans) and was never too busy to strike up a conversation with anyone and everyone. Most importantly, he loved his family and spending time with them, traveling near and far, baking cookies with the grandchildren, playing games, or watching another episode of Family Feud.

The funeral service for David will be held at 11:00 am on Monday, September 21, 2015 at FIRST UNITED METHODIST CHURCH, 325 East Franklin Street in Appleton. Rev. Markus Wegenast officiating. A visitation will be held from 3:00 pm until 6:00 pm on Sunday at the Wichmann Funeral Home, 537 N. Superior Street, Appleton and will continue on Monday at the church from 10 am until the time of the service. In lieu of flowers, memorial contributions may be made to Appleton-North Theatre, First United Methodist Church, or the Brain Tumor Research Program, 9200 W. Wisconsin Ave., Milwaukee, Wisconsin, 53226. Online condolences can be offered at www.wichmannfargo.com.

The family would like to thank Doctors Jennifer Connelly and Wade Mueller at Froedtert Hospital, and Doctors Craig Hendel, Editha Krueger, Tait Fors, and William Fletcher of Appleton, whose combined efforts clearly extended Dave's life. We greatly appreciate the care received from the wonderful employees of ThedaCare at Home, Home Instead, and Heartland Hospice. Finally, words cannot begin to express the depth of our gratitude for all the family and friends who have helped and supported us throughout Dave's illness–your kindness will never be forgotten.