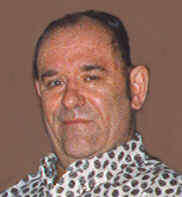 David L. Petznick, age 73, of Appleton, passed away Friday, August 7, 2009. He was born in Appleton on August 29, 1935; son of the late Russell and Dorothy (Smith) Petznick. David served his country in the National Guard, and was employed by the Post Crescent (Thompson Papers) for his entire career of 42 years. He enjoyed spending time with their two pet cats, and going out for breakfast on occasion. He enjoyed his retirement. David also was a supporter of the Humane Society and supported Paralyzed Veterans of America.
Survivors include his wife of 27 years, Susan Petznick, one brother Reginald (Jean) Petznick, and one sister LaVerne Beltrone. He is further survived by two step children, Daniel (Janice) Siebers and Amy Siebers, three step grand children, and several in laws as well as many nieces and nephews. He was preceded in death by his parents and two brothers and a brother in law. A memorial service for David will be held on Tuesday, August 11, 2009 at 7:00 p.m. at WICHMANN FUNERAL HOME, 537 N. Superior St., Appleton with Fr. Robert Karuhn officiating. Family and friends may visit at the funeral home on Tuesday from 6:00 p.m. until the time of the service.

The family would like to thank the staff at St. Elizabeth's Hospital, and Colony Oaks Care Center for all of there assistance during this difficult time. There are truly angels all around us.

“God Saw he was getting tired, and a cure was not to be, so He put his arms around him and whispered “come with me”. With tearful eyes we watched him suffer and saw him fade away, and though we loved him dearly we could not make him stay. A golden heart stopped beating, hard working hands to rest, God broke our hearts to prove to us, he only takes the best.”