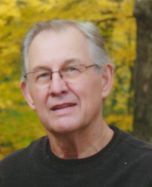 David Hadrian Freiburger was born on October 14, 1943 to the late Janet (Steingraber) and the late Sgt. David Freiburger, Sr. in New London. David became a child of God through baptism on October 31, 1943. He went to heaven on Wednesday, December 3, 2014 at Appleton Medical Center. “Jesus said, 'I am the resurrection and the life. He who believes in me will live, even though he dies; and whoever lives and believes in me will never die.'” John 11:25-26.

David was preceded in death by his parents, a brother Bobbie, father-in-law Ferdinand Schultz, and step-father Robert Krause.

The Christian Funeral will be Tuesday, December 9, 2014 at 4:00 p.m. with Pastors Tim Glende, Phil Koelpin, and Dustin Sievert officiating. Visitation will be from 1:00 p.m. until the time of service at ST. PETER LUTHERAN CHURCH, N2740 French Road, Appleton.

The Family gratefully acknowledges all the doctors and nurses at AMC Hospital for all of their care, compassion, and guidance through David's illness.

In lieu of flowers, memorials can be given to St. Peter Lutheran Church/School, Mt. Olive Lutheran School, or the WELS Home/World Missions.