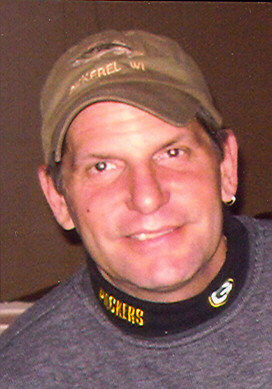 David “Ike” Eisenschink, 46 of Kaukauna passed away on March 14, 2010 unexpectedly. Ike was born on May 28, 1963 in Manitowoc. He married Deedi Hermsen on July 25, 1986 and they made their home in Kaukauna. Ike loved the outdoors, spending time up north, and especially ice fishing. He also enjoyed jet skiing and NASCAR races even attending the race at Bristol twice. Most of all Ike enjoyed a good campfire and the family and friends around it. He also coached his son at baseball and had his own business, Ike's Construction Company.
Ike is survived by his wife, Deedi, Kaukauna, their children: Krystal (Jeremy) Nechodom, Kaukauna; Kyle Eisenschink, Kaukauna; two grandchildren; Hunter and Taylor Nechodom; and a step granddaughter Nahlana Nechodom. Ike is further survived by his mother; Marlene Grimmer, his father-in-law; Dave ( Barb) Hermsen, mother-in-law; Rosie (Doug) Thompson, a brother; Dan (Ellen) Eisenschink, three sisters; Debbie (Steve Douglas) Miller, Diane Schultz and Cheryl (Ron) Pennenberg, a brother-in law; Doug (Joan) Hermsen, sister-in-law; Michelle (Dennis) Grimh, step brothers-in-law; Eric (Jenny) Derks, Bob Thompson, and Scott (Karen) Thompson, his black lab and best friend Pepper, nieces, nephews, other relatives and many friends. Ike was preceded in death by his father; William Grimmer, a niece, Jessica and his grandparents.
A memorial service will be held on Thursday, March 18, 2010 at 12:00 noon at IMMANUEL UNITED CHURCH OF CHRIST (510 Sullivan Ave, Kaukauna) with Pastor Melinda Feller officiating. Friends may call on Thursday from 10:00 AM until the time of services at the Church. In lieu of flowers memorials may be made in his name.
Fargo Funeral Home
400 W. Wisconsin Ave.
Kaukauna WI 54130
920-766-6200