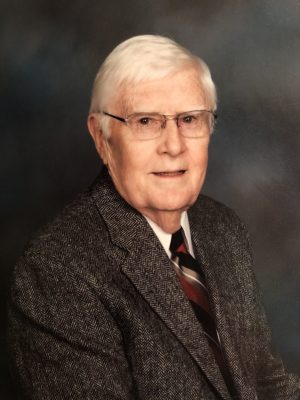 David will be accorded Full Military Honors at Resthaven Cemetery. He and his wife Gladys, who preceded him in death, will be laid to rest together.

David, the devoted son of David J and Blanche Prosser, was born in Neenah, Wisconsin in July, 1926. He grew up in the Neenah/Menasha area. After graduating from Menasha High School, he enlisted in the Army during World War II. He expected to be shipped to Europe at the end of his basic training, but the tide of the war in Europe turned and he was deployed to the Philippine Islands instead. After the Japanese Armistice was signed, he was shipped to northern Japan as part of the post war occupation. He was honorably discharged in December, 1946.

He returned home to Menasha and began his post-secondary education, graduating from UW Madison in 1951, majoring in Agronomy/Soils. Following his graduation, he accepted a position with Smith Douglas in Streeter, IL working with farm fertilizers.

At about the same time he met Gladys Merbach. The two corresponded, dated and in June, 1954 were married and began their life together. David’s farm chemical career moved the couple to Le Sueur, MN and later to Albert Lea, MN. A sales manager position with Cominco in 1976 brought them to Fargo, ND where they worked, played and finally retired. They were long-term members of Grace Lutheran Church in Fargo. They celebrated 65 years of marriage in 2019. David lost his cherished wife Gladys in January, 2020.

David’s hobbies included cooking, fishing, reading, computers, crossword puzzles and card games. He enjoyed a good martini and a slice of Wisconsin cheese. He was a life-long Packer fan and was known for his award winning “Rough Rider Chili” recipe.

David was preceded in death by his wife Gladys; his parents David J and Blanche; sister-in-law Marion (Wilbur); and brother-in-law Wayne.

Family and faith always mattered most to David. He became an instant friend to everyone he met. His advice in life to all was “always start each day with a good attitude!”

David and his wife Gladys will have a graveside service on June 7, 2021 at 10:30am at Resthaven Cemetery on North Street in Neenah. David will receive full military honors at that time.

In lieu of flowers the family requests donations be made to the charity of your choice.

David will be accorded Full Military Honors at Resthaven Cemetery. He and his wife Gladys, who preceded him in death, will be laid to rest together.