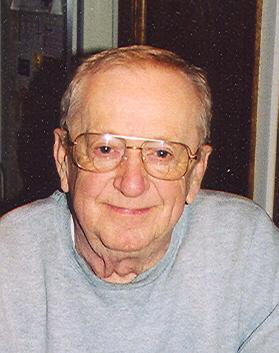 Age 72, died on Thursday, April 22, 2004 at his home. Red was born on December 6, 1931, in New Rockford, North Dakota, to the late Edward and Hilda Mae (Loesel) Schwarz. He married Joan Hart of Appleton on June 16, 1956; she preceded him in death in 1998. With his family, Red moved to Roseau, Minnesota, 1932, graduating from Roseau High School in 1949. He was proud to serve his country for 22 years in the United States Air Force, enlisting in 1950, and serving during the Korean Conflict. Following his retirement from the Air Force in 1972, Red was employed in retail sales for 20 years. Red's hobbies included photography and golfing. His real passion was gardening. Friends and family could count on receiving fresh vegetables from his garden. Red was also very dedicated to his love of God.

The funeral liturgy will be held at 12:00 p.m. on Wednesday, April 28, 2004 at HOLY ANGELS CATHOLIC CHURCH, W5831 Highway KK, Darboy, with Fr. Dennis Bergsbaken officiating. Friends may call at the church from 11:00 a.m. until the time of the service. Interment will be at Holy Angels Cemetery following the liturgy.

The family would like to extend a special thank you to Dr. Mark Hallet, Dr. Jeffrey Whiteside, and the staff at Theda Care at Home for their compassionate care.

A memorial fund in Red's name is being established.