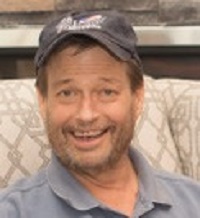 Surrounded by family, Daniel Leo Weiland, age 57, passed away peacefully at 6:06 pm on September 13, 2017 at Century Oaks Assisted Living in Appleton. He died after a prolonged illness; throughout his ordeal, Dan was positive and pro-active.
Dan was born on August 30, 1960 to the late Leo and Frances (Green) Weiland and he grew up in Kimberly. Dan attended Holy Name Grade School, JR Gerritts Junior High and graduated from Kimberly High School in 1978.

Like his mother, Dan took pleasure in everyday life. He was talkative and liked people. He loved all kinds of music. Dan was an avid Packer fan and sports enthusiast in general. He liked “hanging out with the guys”.

Dan wanted his own business. In 1980, he opened Audio Elite, a high-end sound system business and, a couple of years after that, he started renting out apartments. Dan’s love of music prompted Audio Elite and it became his professional passion. Initially, it was a retail store and, in time, Dan expanded it to include mail order sales. He operated it in Menasha for about 12 years and in Olympia, Washington for another 5 years. He returned to the Fox Valley to be with family.

Dan married Tracey Conger in 1991. The couple enjoyed living in the country, being with family and playing with their four dogs. They later divorced, maintaining a close friendship until his death.

Family was important to Dan. As a young boy, Dan helped his father and brother to farm on land outside of Kimberly. Dan’s father, Leo, died when Dan was 12 years old. When Dan was in his mid-20s, he voluntarily assumed responsibility for maintaining Leo’s gravesite and, with Tracey’s help, quietly did so for many years. He became a man who freely told family members he loved them.

The funeral service for Dan will be held on Saturday, October 14, 2017 at 10:30 am at Holy Spirit Catholic Church, 600 Kimberly Ave., Kimberly. Fr. David Pleier celebrant. A time of visitation will be held on Saturday, October 14, 2017 from 9:00 am until time of service.
Family members would like to thank Dr. Schimke and her staff at Aurora Health Center, Kaukauna, Century Oaks Assisted Living, Appleton, and all the caregivers who helped Dan throughout his illness.

Memorial contributions will be donated to the Fox Valley Humane Association and Homeless Connections.