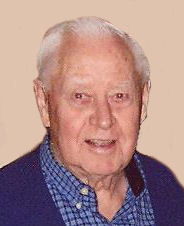 Daniel Franklin O'Leary, age 95 of Appleton, Wisconsin, left this life on December 4, 2014. He was born the second of nine children on March 22, 1919 in Wausau, Wisconsin, the son of Clara (Ohm) and Daniel O'Leary. He is survived by his wife, Margaret, whom he married on April 9, 1943 at Fort Sam Houston in San Antonio, Texas. Margaret and Daniel recently celebrated their 71st anniversary and were life-long members of Sacred Heart Parish. Daniel served in the European Theater during WWII and was captured in Poland and then force-marched from Oflag 64 to Stalag 111A in Germany, where he was held as a prisoner of war. After his release, he trained as an Air Observation pilot, leaving the military with the rank of Captain. He then began his financial career with Thorp Finance in Wausau and at retirement held a position in Consumer Finance at ITT in Wauwatosa. Daniel also volunteered at the VA Clinic in Appleton for 17 years and treasured his time there.

He was preceded in death by his parents, brothers: Milton, Kenneth, and Donald; brothers-in-law: Gordon Genrich, Michael Sullivan, and John Sullivan; and sister-in law: Mary Belongia.

The funeral liturgy for Daniel will be held at 1:30 PM on Saturday, December 6, 2014 at SACRED HEART CATHOLIC CHURCH, 222 E. Fremont Street in Appleton, with Fr. Donald Zuleger officiating. Family and friends are invited to gather at the church on Saturday from 12:30 PM until the time of the liturgy. Interment will take place at Appleton Highland Memorial Park. In lieu of flowers, please make a donation to St. Joseph Food Program.

Special thanks to the staff at the Manor Care and Rennes nursing homes, Heartland Hospice, and for the care by Sue Fitzgerald.