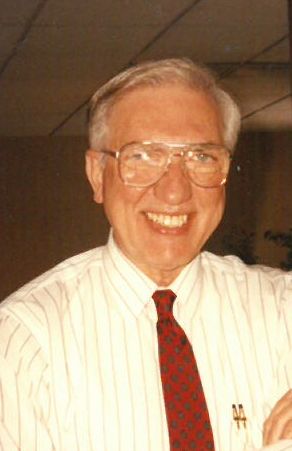 Dan was joined in marriage to Beverly Peterson on August 16, 1952.

Dan graduated from the Navy Officer Candidate School in May of 1953, and was commissioned as an Ensign. He served aboard the USS Elokomin for years in the North Atlantic and the Mediterranean. After his honorable discharge as Lieutenant from active duty, Dan joined the Packaging Corporation of America and worked as a Research Manager in Grand Rapids, MI, Purchasing Manager in Evanston, IL, and Mill Superintendent of the paperboard mill in Quincy, IL. In 1971, Dan joined Albany International as a Sales Engineer in Appleton. In 1973, he transferred to the corporate headquarters in Albany, NY, and became the Vice President of Marketing in 1977. He returned to Appleton in 1981 as the Vice President and General Manager of the Appleton Wire Division until his retirement in 1993.

Dan was a long-time member of the Naval Reserve and the Western Michigan Pulp and Paper Foundation, as well as many charitable organizations throughout his career. While in Appleton, he particularly enjoyed serving on the boards of Valley Packaging Corporation and the Fox Valley Family Practice Residency. Dan was a member of First Congregational United Church of Christ and Butte des Morts Country Club.

Dan is preceded in death by his wife Bev of 62 years, his son Ron Bergsma, his parents, and sister Trudie Turnquist.

The memorial service for Dan will be held at Touchmark on West Prospect, 2601 Touchmark Drive, on Monday September 16, 2019 at 11:30 AM. Memorial visitation from 11:00 AM until time of service. Private interment at Highland Memorial Park.

In lieu of flowers, memorials to the Dan and Bev Bergsma Endowed Scholarship at Western Michigan University Paper Technology Foundation, secure.wmualumni.org/s/give or First Congregational Church UCC, Appleton, are appreciated. To share a memory or to make a memorial contribution, please visit www.wichmannfargo.com.

Dan’s family would like to extend a heartfelt thank you to the staff of Touchmark Grand and Admiral, and Heartland Hospice for their compassionate care and friendship during his stay.