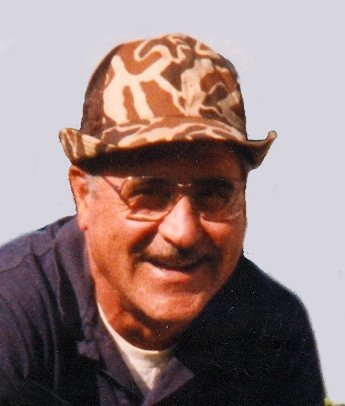 Dan Roberts served the country that he loved in the Army during the Korean War conflict. He spoke very little about his deployment and chose to keep his military experiences private. What he did share was that he was a bazooka gunner and helped construct bridges and towers during his time there. Dan was patriotic and fiercely proud of his country.

Dan began working as a flooring installer for Laydwel Floors he then broke away and started his own installation business R.I.P Roberts Professional Installation in time he expanded into what is now known as Floors by Roberts.

Dan loved all his siblings and had cherished memories of his childhood. He loved to reminisce and had warm stories to share about them all.

Over the years Dan was given several nick names. One name was given to him by his longtime friend Harold (Harkey) Baeten. Due to spending so much time outdoors fishing, Dan's skin had become extremely tan. One day Harkey exclaimed “Dan You look just like you fell down a chimney! And there after Harkey would always refer to him as “Sooty”. Many people knew him better by another nickname, “Diaper Dan”. This name was given to him by legendary Doty Bayorgeon from Kaukauna. He was a great family friend and as the story is told he pinned this name on Dan merely because he was the youngest in the family. Much to Dan's chagrin but to the delight of many the nickname stuck. To make matters worse he was often times simply referred to as “Diaper”.

Dan and Mary (Jane) created a family of four children together that they loved very much. They did a fine job raising them and were proud of each one of them in their own unique way. He gushed how their oldest daughter Kim or “Kim-bee” as he affectionately called her would bring him pots of her delicious homemade soups. He relished the many mornings they would meet for breakfast and linger over coffee at a local diner. Kim was his rock and the glue of the family. He valued her love, her trust and her resolute voice of reason.

Their eldest son Kurt is the spitting image of his father. They share the same sense of humor and love for family. To “know them is to love them”. He and his dad were very close and he would check up on “Pa” nearly every day with a phone call at the least. It wasn't unusual for Kurt to run out to the lake just to grab a quick lunch, drop off a great chunk of cheese, a jar of honey or a few of his farm fresh eggs.

They were also very proud of Mike and the successful business man he has come to be. His dad spoke most fondly of the Canadian fishing trips Mike organized that included Dan, Kurt, Mike and Grandsons Luke and Corey. The times they spent together created memories that he cherished and held dear.

Kerry or “Kerry cakes” as Dan affectionately called her was the youngest of their four children. Dan beamed with pride when Kerry became a Dr. of Psychology and he warmheartedly referred to her as “Kerry the shrink”. Kerry resides with her family in California and although Wisconsin may seem a world apart they both knew they were really only a heartbeat away.

Dan beamed when he spoke of his grandchildren and great grandchildren. He treasured the photographs he received of them and would promptly hang them on the wall or find a spot on the refrigerator door to proudly display them for all to see.

Near and dear to Dan's heart was his nephew Scott “Scotty” Schuler. Grandma Anne Roberts always said Scotty was really more like Dan's baby brother. Scott lives next door with his wife Pam and during the Summertime just around “Happy Hour” you might see Scotty drive across the lawn on his garden tractor towing a small cart behind filled with all the necessary cocktail ingredients. Scott and Pam always kept a watchful eye on things and it was a true blessing and of great comfort to the family knowing that they were mere footsteps away. For that the family will be forever thankful.

Dan was an avid outdoorsman. He was a successful deer hunter and has several trophy mounts on his walls to show for it. Dan also enjoyed hunting pheasant and grouse. When his boys were younger he bonded with them by taking them on long treks through the woods hunting for squirrel. He also enjoyed spearing Sturgeon but his greatest passion in life was undeniably fishing, and his lifeline was Lake Winnebago. He lived on the east shore with his wife Mary “Charlie” Roberts in St. Catherine's Bay and over the years Dan had endless opportunity to explore every square inch of the lake. He knew where every weed bed, every sand bar, and every rock ledge was located. He would know exactly which bait to use and what method of fishing would land him their next fish dinner. He was considered by many as the Local “Indian guide”. He would receive phone calls on a regular basis inquiring as to where the hot spots were, what was biting and what he was using. He was a gifted story teller and could weave a fish net of tales that to most seemed highly improbable but unlike others who might be all talk, Dan's stories were true. He had the photos to back them up and a freezer full of filets to prove it. Dan once said that he would “talk to God in his boat with a rod in his hand” It seems only fitting that his final moments were spent near his boathouse just a few short feet from the body of water that provided him with so much peace, solitude and happiness.

Dan valued the time he spent playing cards and drinking Budweiser with his buddies immensely. He had a knack for hearing a joke once and then telling it back again even better. He cherished his friends dearly and always tried to leave them with a chuckle.

Dan loved the Green Bay Packers, the Milwaukee Brewers and the Wisconsin Badgers. He and Kurt held many phone conversations debating who should get drafted, who might get traded or who should just get fired. He was thrilled that “his Badgers” had made it to the final four and was looking forward to watching their next game. Kurt recently commented that now Dan would have the “best seat in the house” and Grandson Luke countered, “Yup, he will be sitting up in the sky box”.

Dan loved his Springer Spaniel Max. Max was his steadfast companion. Be it in the boat fishing or out at a job site measuring for flooring Max could always be found by his side. After Max passed away Dan got a yellow lab pup named Suede. Suede adored Dan and followed him around where ever he went. Eventually Suede grew much too large for the boat and Dan was forced to leave him behind. Suede would then park himself at the water's edge and wait in anticipation of his master's return. From a good distance Suede could recognize Dan's boat just by the sound of the motor and would bark and carry on until the boat was docked. It was as if Suede had appointed himself the official light house beacon of St. Catherine's Bay. He greeted Dan each time he returned home from fishing like he had gone for days.

Dan was preceded in death by his grandparents, parents Bert and Anne Roberts, his brother Dick Roberts and sisters Mary (Roberts) Ranquette and Joyce (Roberts) Schuler.

There will be a gathering of family and friends on Thursday, April 9, 2015 at Holy Cross Catholic Church, 309 Desnoyer Street in Kaukauna from 9:30 am until the time of the service. Funeral Services will be at 11:00 am at the church.

We pray that when Dan got to heaven he found there waiting for him a St. Catherine's Bay where the fish are always biting, the sun is always shining and there is no daily limit on Walleye.