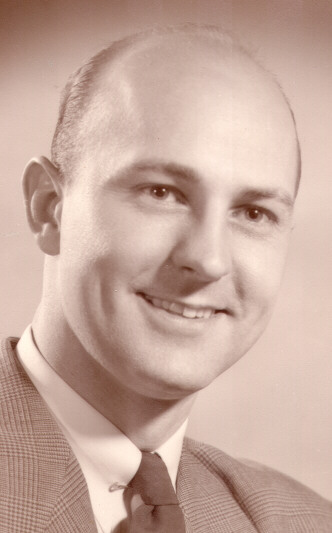 Skran, Dale Louis Sr. of Saginaw, Michigan passed away quietly after a long illness on Monday, November 16, 2009 in Appleton, Wisconsin. Born on March 14, 1923 in Toledo, Ohio, he was 86 years old. Dale grew up in Michigan and Ohio as the oldest of three siblings. Despite the hardships of the Great Depression, Dale and his friends and family entertained themselves playing games that he invented. He graduated from Scott High School in Toledo, Ohio in June 1941, where he played football. During WWII he worked at the Willys-Overland Company on 155 MM shells, jeep engines, aircraft machining, and other war work, and also attended University of Toledo at night. In 1950, he graduated from General Motors Institute with a degree in industrial engineering, and he began what became a 40 year career in the auto industry. Dale's first job in Saginaw was as a foreman at Chevrolet Saginaw Transmission. He continued to work with GM and Chevrolet in a variety of management positions, including Master Mechanic, until 1981, ending his career as Manager of Quality Assurance for Front End Brakes at Chevrolet Saginaw Manufacturing. During his tenure in this position, the factory won many awards for the safety of its brakes and other products.

Dale was also a devoted husband and father. On June 17, 1950, he married Ethel Orlean Payne “Bunny” of Temperance, Michigan. Together they moved to Saginaw, Michigan, initially living in a basement apartment on Court Street and then buying a farmhouse in the country outside of town. As newlyweds, Dale and Bunny took many trips, including one to the Smoky Mountains as a honeymoon and another to Yellowstone Park. As a couple, they were active in the Young Republicans, the YMCA Dance Club, and Epworth United Methodist Church. Although Dale spent his career working in manufacturing, his main hobby was gardening, and he and Bunny spent many happy hours cultivating their garden. When not in the cornfield, Dale enjoyed science fiction, especially Star Trek, watching football on TV, and eating popcorn and ice cream. On March 17, 1958, their son, Dale Jr. was born, and on April 18, 1961, their daughter, Claudena Marie arrived; they mourned the loss of a baby girl in 1960. The family spent many happy vacations on Lake Skegamog in Grand Traverse County, Michigan. Dale took great pride in the achievements of his children, Dale Jr., a 1976 National Merit Scholar and currently a technology entrepreneur in Marlboro, New Jersey, and Dena, a 1983 Rhodes scholar and currently a professor at Lawrence University in Appleton, Wisconsin.

He loved both his daughter-in-law, Josephine Paltin, and his son-in-law, David Duncombe, and was especially fond of his five grandchildren: Samuel Paltin Skran and Sarah Rebecca Skran of New Jersey, and Natalie Marie, Caroline Jane, and Andrew Louis Sanford Duncombe of Wisconsin. Dale is survived by his children, grandchildren, and niece, Susan, and nephews, John and David Henry. Dale's beloved wife of 59 years, Bunny, passed away on March 5, 2009. His parents, William Daniel and Marie Inanda (Peterson) Skran, predeceased him, as did his two sisters, Glada Marie (Skran) Henry and Thelma Joann Skran, and his two half-brothers, William “Bill” and Richard “Dick” Elton. He will be deeply missed.