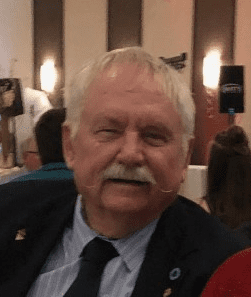 On June 28, 2020, Dale Stabe took residence up in Heaven after a courageous battle against covid-19.
Dale was born on August 26, 1943 to Merritt and Ethel (Anunson) Stabe in Oshkosh. He served his country honorably from 1963 to 1966 in the U.S. Army. He was stationed in Germany and served on the President’s Honor Guard.
Upon arriving home, Dale worked in various occupations, ending his working career with Kimberly Clark, retiring in 2004. Since then he worked a few part time jobs, because he liked being with people.
On January 4, 1969 he married Lana Wundrow and they enjoyed 51 plus years of Wedded Bliss.
Dale’s best times were hunting with his sons. He was an avid hunter, fisherman, motorcycle rider and enjoyed visiting the casinos.
Dale is survived by his wife Lana, his sons James (Lisa) Stabe and John (fiancé Tracy Waite) Stabe as well as numerous cousins and an untold number of friends.
He was preceded in death by his parents, Merritt and Ethel Stabe, his sister (Debra) Stabe, his nephew Richard Fieck, Lana’s parents, Raymond and Della Wundrow, and one brother-in-law Thomas Wundrow and other relatives and friends.
Out of an abundance of love for our family and friends, a private Celebration of Life will be held. Anyone hoping to watch the Celebration of Life may see it live on Wednesday, July 8, 2020 at 11:00am at www.wichmannfuneralhomes.com.

The family wishes to thank the nurses and staff at ThedaCare of Appleton for the tender care they afforded Dale.
In lieu of flowers, a memorial fund will be established. Donation may be sent to Dale’s family or written to the family and mailed to the Dale Stabe Family, C/O Wichmann Funeral Home, 537 N. Superior Street, Appleton, WI 54911.