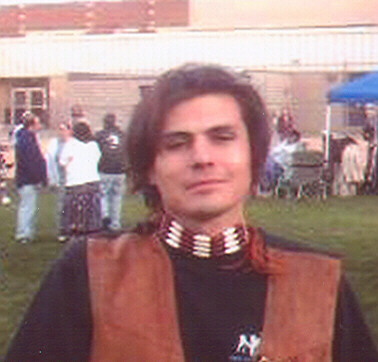 Age 27, died after a sudden illness on Sunday January 13, 2008. Curtis was born on October 13, 1980 in Fort Atkinson, Wisconsin. Curtis was a graduate of Appleton North High School, class of 1999. He married Sheila Pingel, on October 16, 1998. Curtis was very active in the Native American culture. He is survived by his parents Linda (Greg) Heino, Appleton, Lloyd (Sue) Evans, Beloit, WI.; his wife Sheila, Appleton; his children, Malachai, and Hannah; his sisters, Chassidy Heino, Appleton; and Heather (Scott) Schmidt, Appleton. He is also survived by his grandparents, Maria (Virgil) Smith, Jefferson, WI.; Ruth (Leo) Heino, Maple, WI.; 3 nieces and a nephew, aunts and uncles. Curtis is preceded in death by his twin infant children Emmanuel Evan and Evangyline Rosemary, his great grandmother, Rose Skinaway , his grandfather, Reinhold Paschkowski, and 2 cousins.

Funeral services for Curtis will be held at 11 a.m. on Friday January 18, 2008 at Good Shepherd Lutheran Church, 222 E. College Ave., Appleton with Pastor Martin Koeller officiating. Visitation will be held on Thursday January 17, 2008 at the Jansen Fargo Funeral Home, 204 E. Kimberly Ave., Kimberly from 5-8 p.m. Visitation will also be held at the church from 10 a.m. until the time of services. A memorial is being established.