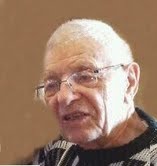 Cornelius “Cory” A.Van Boxtel, 90, of Kimberly, passed away on Sunday, May 13, 2012, with his family by his side. Cory was born on July 14, 1921 to Peter and Gerarda (Schopkema) Van Boxtel in Little Chute. He served in the U.S. Army during WWII. Cory married Betty Gerrits on June 29, 1949. He worked at Kimberly Clark for many years until his retirement. Cory loved hunting, fishing and woodworking. He was a very talented and skilled person and could build or fix anything. Cory made many toys for his grandchildren and enjoyed playing cards with his family and friends. He enjoyed spending time with his children and grandchildren and those times will always be cherished. Cory was a member of American Legion Post #60 and the Kimberly Volunteer Fire department.

The funeral liturgy will be held on Wednesday, May 16, 2012 at 5:00 PM at ST. PAUL CATHOLIC CHURCH (410 Wallace St., Combined Locks). A time of visitation will be held on Wednesday from 3:00 PM until the time of the mass at the church. Interment will be in the Holy Name Cemetery. The family would like to extend a special thank you to all of Cory's caregivers over the last nine months. In lieu of flowers a memorial is being established in Cory's name. online condolences may be expressed at www.wichmannfargo.com.