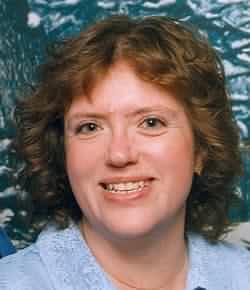 Colleen K. Smith-Dodge, age 36, of Batavia, NY, formerly of Appleton, died Wednesday, July 5, 2006. She was born October 28, 1969, to Keith F. and Carol Jean (Rieckmann) Smith, in Appleton. Colleen was baptized at Mount Olive Ev. Lutheran Church and was confirmed at St. Matthew Ev. Lutheran Church and graduated from Appleton High School-West in 1987. Following her graduation she was employed by Mary's Place-North, Chi Chi's, the Third Street Diner, Menasha. Following her marriage to Lyle Dodge, on September 13, 1998, she moved to Batavia, NY, where she was employed by Bob Evans Restaurant, where she received a certificate for seven years of service. Colleen was a member and leader of Lutheran Girl Pioneers, and the St. Matthew basketball team. She is survived by her husband, Lyle Dodge; her mother, Carol Jean Smith, Appleton; four siblings, Carla (Bill) Fagg, Green Bay; Kim (Jenny) Smith, Neenah; Cheryl Lee, Appleton; Kurtis (Barbara) Smith, Appleton; nieces and nephews, Jason, Melissa, Ryan, Nicholas, Christopher, Elliott, Tori, Stephanie, Michael, Josh, Tyler, Austin, Elisha, Cory and Amber; three great nieces and nephews, Caitlin, Joey and Benjamin; numerous aunts, uncles and cousins. She was preceded in death by her father, Keith F. Smith, on May 4, 2002. A memorial service for Colleen will be held at 5:00 pm, Thursday, July 13, 2006, at the funeral home, with Reverend Jeffrey Verbeke officiating. Friends may call at the funeral home on Thursday, from 2:00 pm, until the time of the service. A memorial fund is being established.