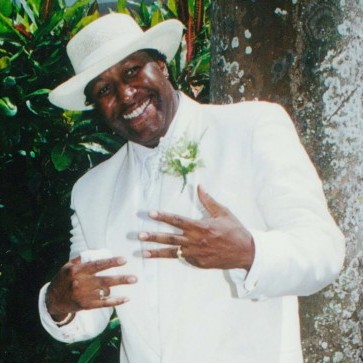 Cleo (Sugabear), Alexander Jr. Age 63, was born July 10, 1954 in Milwaukee Wisconsin to Cleo C. Alexander Sr. and Delores (Zolicoffer). Cleo grew up in Milwaukee, attended Washington High School where he was a key player on both the football and basketball teams. Cleo’s professional career, with the City of Milwaukee Department of Sanitation, spanned 19 years and as Chief Maintenance Officer for the Hilton Garden Inn Hotel Chain, 2 years.

Cleo accepted Christ as his personal savior, early in life and attended Bethel Baptist and Holy Cathedral Church of God In Christ. In 2016, Cleo joined Appleton’s First United Methodist Church where he served as one of the Lord’s “sheep”, until he went home, on March 29, 2018, to be with Jesus.

On July 10, 2002, Cleo married his best friend and confidant, Eldridge Jean Miller in Ocho Rios Jamaica and in 2007, the couple relocated to Grand Chute Wisconsin. Cleo, an avid sports enthusiast, practiced “martial arts loved nature and often took long walks along Lake Michigan and the Bubholz Nature Center in Appleton, enjoying God’s handiwork. Cleo watched Jeopardy daily often answering all questions in several categories and the Final Jeopardy question. Cleo had a special relationship with many of God’s creatures (birds, horses, dogs, deer etc.) seemingly speaking their language “they came when he called” and succumbed to his commands. Cleo enjoyed traveling with his wife to their favorite Las Vegas (Signature AT MGM Grand) and Jamaican (Couples Ocho Rios) destinations.

A celebration of Cleo’s life will occur on Saturday April 28, 2018, at First United Methodist Church 325 E. Franklin St, Appleton WI 54911. All church members are invited to attend the service from 11:00-1:00 with a repast for immediate family, clergy and musicians immediate following.

May you find comfort in the unforgettable moments you shared with Cleo C. “Sugabear” Alexander Jr.

Psalm 27:1 THE LORD IS MY LIGHT AND SALVATION