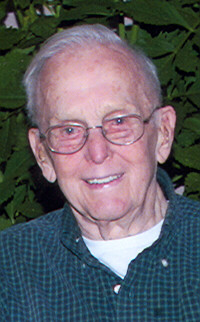 Age 94, passed away at home surrounded by his loving family on Friday, March 12, 2010. He was born in Marion Township, OH on December 16, 1915, the son of the late Alfred A. and Magdalena (Weber) Weber. He married his cherished wife of 68 years, Adele Olson in Bowling Green, OH on April 28, 1941. Clayt graduated from Ohio State University with Bachelors and Masters Degrees in Chemical Engineering. He was a chemical engineer for Dow Chemical Company in Midland, MI where he was heavily involved in the development of Saran wrap. In 1968 he moved his family to Appleton to work for Presto Products, retiring in 1986. In his retirement, Clayt remained active as an engineering consultant and maintained his focus in chemistry. He continued to enjoy skiing, hunting, and always his family's interests and activities. Clayt will be remembered for instilling his values of education, achievement and spirituality in members of his extended family. Later in life he became interested in philanthropy and supported many projects of his church and community. His personal motto of, “It goes the way you drive it” combined with Adele's motto, “Keep that happy smile” made them an amazing team.

A private family service will be held.

Donations in Clayt's name may be given to Memorial Presbyterian Church, 803 E. College Ave., Appleton, WI 54911.