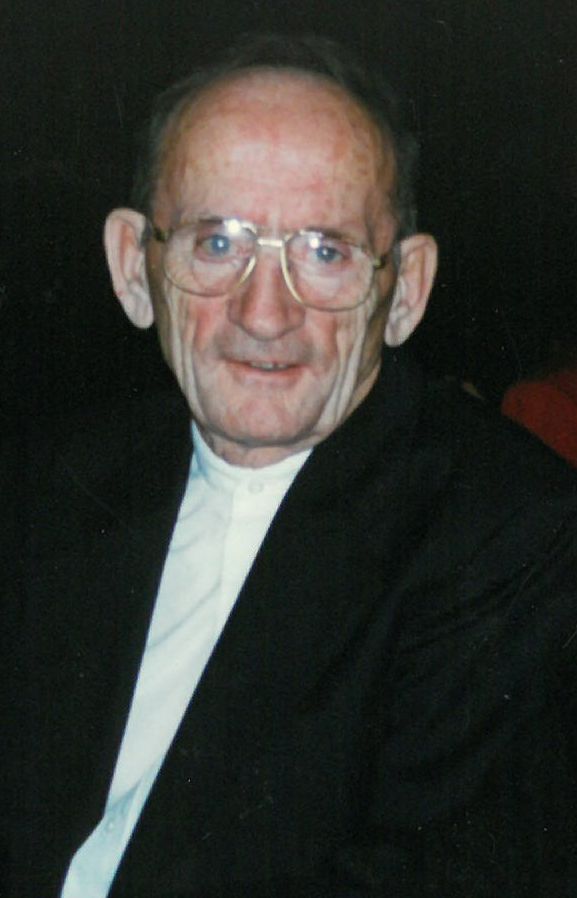 Clayton John “Sputs” McCabe, age 93, passed away Sunday May 27, 2018 at Brewster Village in Appleton, WI where he resided for the past five years. He was born on July 18, 1924 in Little Chute to the late Ray and Ignado (Newcomb) McCabe. Clayton married Kathleen Femal on July 28, 1945. Together, they had three children, Kitty, Bruce, and Jeff. Kathleen passed away in 1994 after a short battle with cancer.

Sputs was a lifelong employee of Thilmany Pulp and Paper where he attained the position of head of the ink department. Because of his wit, he was often the master of ceremonies at mill events. He lost the sight in one eye in a childhood accident which precluded him from serving in the military during WWII, but he served the youth of his community well in many capacities. He coached football at St. John’s in Little Chute, basketball at Holy Cross in Kaukauna, was a Boy Scout Leader and worked with young people through the Junior Achievement Program.

In retirement, Sputs wintered in Florida with Kathleen and, later, with his special friend Shirley West. He and Shirley divided their summers between Michigan and Wisconsin, staying with Sputs’ children in Combined Locks and Kaukauna. He loved woodworking and worked on many small projects with his grandchildren. He took them for ice cream weekly when he was in town and called them his turkeys, numbering them by age.

He enjoyed camping, and over the years, he and Kathleen had permanent sites at four different campgrounds “up north”. He was always available to help people with projects and repairs and to set up for church services at the campground. He continued this practice in Florida as well as at Brewster Village, setting out chairs for activities and putting them away afterward.

He also kept the outdoor courtyard of his house, The Mills, and at Brewster Village swept and tidy during good weather, wearing out several brooms during his residence there. Idleness was his enemy. It was not uncommon to come home from work to find your garage clean as a whistle because Sputs needed something to do. In addition, he enjoyed golfing and in later years, bingo. Although, in his younger years he was known to say that he would rather watch his car rust than play bingo.

Sputs was known to his family as “Gramps”. He will be remembered and sorely missed for his wry wit, good humor and for his infinite patience with us all, especially as a teacher in athletics, good sportsmanship or home improvement skills. He loved a good cup of black coffee, cookies (especially windmill) and lemon meringue pie. He was the consummate gentleman and led by example. Our Dad is best epitomized by a C.B. Kelland quote: “He didn’t tell me how to live; he lived and let me watch him do it.”

Funeral liturgy will be held at Holy Cross Catholic Church, 309 Desnoyer Street, Kaukauna on Thursday May 31st at 12 Noon with Fr. Karl Meulemans officiating.
Visitation at the church from 10:00 AM until the time of service. Interment to follow at Holy Cross Cemetery.

We are eternally grateful to the staff at Brewster Village for their kind and compassionate care of our father during his residence there. We always felt completely comfortable and secure in the knowledge that he was in good hands. Memorials to the Juvenile Diabetes Research Foundation or the Warming Shelter in Sputs’ name are appreciated.