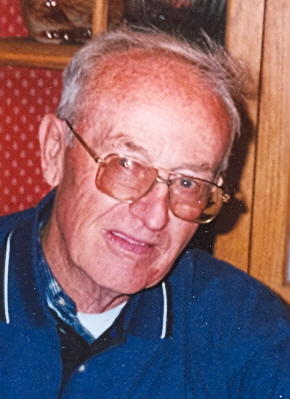 Age 83, passed away unexpectedly in Kaukauna on Thursday, November 12, 2009. He was born on September 11, 1926, the son of the late Lawrence and Adela (Gilbert) Weyers and lived his whole life in Kaukuana. On June 25, 1949, he married his beloved wife of 60 years, Phyllis Wirth. He served in the United States Navy during World War II as a photographer for Naval Intelligence. Clayton owned and operated Weyers Equipment with his two brothers. He was an avid bowler and card player. Clayton will be remembered for his love of family, strong work ethic, and his hardy laugh.

The funeral liturgy will be at 11:00 a.m. on Thursday, November 19, 2009, at HOLY CROSS CATHOLIC CHURCH, 309 Desnoyer St., Kaukauna. The friends will be received at the church on Thursday from 9:00 a.m. until the time of the service. Burial and military honors will be at Holy Cross Cemetery.

In lieu of flowers, a memorial fund in Clayton's name is being established.