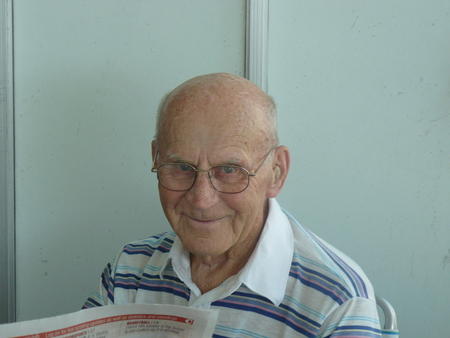 Clarence W. Huth, age 89, of Fort Myers, Florida, passed away on Saturday, May 12, 2012 after a short battle with cancer. He was born in East Troy, Wisconsin, the son of the late Alma and Frank Huth. On July 13, 1946, he was united in marriage to Delores Radder. Clarence proudly served his country during WWII, as an Aviation Machinist in the U.S. Navy. After he served in the Navy, he went to work for Riverside Paper Corp as a pipefitter for 44 years, until he retired to Fort Myers. Clarence enjoyed his family, daily bike rides, playing horseshoes, shuffle board and he loved watching the Green Bay Packers.

A memorial service for Clarence will be held at 1:30 pm on Monday, July 2, 2012 at the Wichmann Funeral Home with Rev. Roger McQuistion officiating. Inurnment will take place at Highland Memorial Park in Appleton. The family will receive relatives and friends from 12:00 noon until the time of service. Online condolences can be expressed at www.wichmannfargo.com