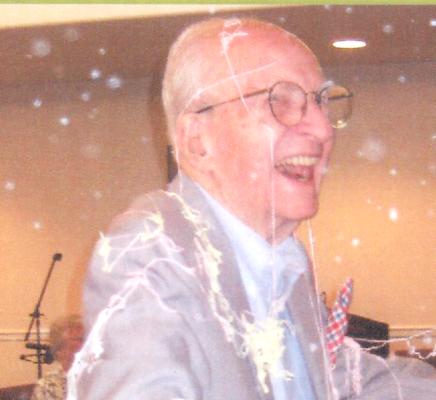 Clarence Merritt Miller, 101, loving husband and father, died Sunday May 13th, 2012, at his home in Appleton. He was born May 31st 1910 in Fond du Lac, WI to Merritt and Bertha Miller.
Clarence retired as a regional sales manager for the Banta Book Group, Menasha, WI (originally George Banta Publishing Company) with whom he was associated for 45 years. He was a board member of the Appleton Junior Chamber of Commerce, editor of it newsletter and served on its many committees. In his youth he was a member of the First Baptist Church of Appleton and one time president of its youth organization as well as teaching Sunday school. He was a 1928 graduate of Appleton High School. He had been a member of the Menasha Elks Club for 47 years and the Neenah Hawley- Dieckhoff Post 33, American Legion for 65 years.
His many hobbies include cabinet and furniture making as well as general woodworking, electronics, photography, computers, genealogy and fixing things. He loved languages and learned to become fluent in the Swedish language having attended courses at University of Wisconsin- Fox Valley, as well as visiting and speaking with his wife's Swedish relatives. He was an ardent boater, belonging to and an officer of the Tri City Boat Club which built the dock in Smith Park, Menasha, WI. He loved the sport of Curling and was a member of the rink which won the National Senior of the first Wisconsin Senior Curling Bonspiels in 1977.
Many vacations were spent on the Wisconsin northern lakes where he enjoyed fishing. Together with his young family, as expert tent campers, they covered many camp sites from Minnesota to Long Island, New York. He loved foreign travel having spent many summers in the Scandinavian countries with his wife Myrtle. They visited all of the continental United States, plus Hawaii, Canada, and Mexico as well as continental Europe.
As a member of the Appleton Volunteer Naval Electronics Warfare Unit he was called to active Naval Duty in June 1941, attending the Navy Radio School in Indianapolis, Indiana. At the start of World War 2 he served serveral years at the Sitka, Alaska, Naval Air Station as a radio operator and electronics technician where he was promoted to radioman First Class. Later, he transferred to several Naval Electronics schools in Chicago including Navy Pier. Upon graduation he was promoted to Chief Electronic Technician. Just prior to the close of World War 2, her served as instructor in mathematics and electronics at the Naval volunteer Electronic Warfare Unit in Appleton in association with the then Lawrence College.
It was in Chicago where he met and married his wife Myrtle. April of this year they celebrated their 68th wedding anniversary.
Clarence is survived by his wife Myrtle and daughter and son-in-law Martha and Chuck Peterson, Villa Park, Illinois. Also cousins Robert Diette and Donna Burton, Fond du Lac, Wisconsin. He was preceded in death by his parents, son Larry, brother Merrill Miller and “the Triplets” brother Carlton Miller, brother Lawrence Miller and sister Ethel Leonard Shaw
Private family services.
Clarence's family thanks all the caring staff at Touchmark, especially the wonderful loving nurses and caregivers. Heartland Home Health Care for their comfort care and the Theda Clark nurses who made his last visit “almost fun”. Thanks also to the Gathering Waters District of the Bay-Lakes Council for the Scouting Certificate of Appreciation.