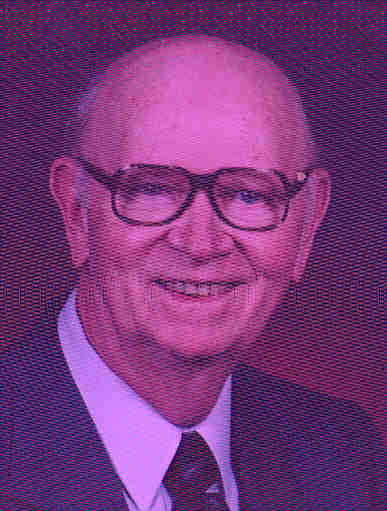 Age 85, entered his Heavenly Home on Saturday, January 24, 2004. Red was born on February 15, 1918, in Appleton, to the late John and Louise (Luedeke) Ehlke. He married Elda Leisering at St. Paul Ev. Lutheran Church in 1942. Red and Elda were blessed with more than 61 years of marriage. They lived in Appleton most of their lives, except for the time he was in California and France during WWII. Red served with the U.S. Army as 1st Sergeant with the 67th and 1139th Engineer Headquarter Corps. He was employed at AAL for 47 years, retiring as 2nd Vice President and Director of Underwriting and Issues Services.

Serving his Lord was a daily priority. Red faithfully participated on various committees at Fox Valley Lutheran High School and at St. Paul Ev. Lutheran Church. He was the financial secretary at St. Paul for many years. Red also served in many capacities, such as counting committee, Men‚Äôs Club, greeter and bible class participant. His other volunteer activities included helping with the developmentally disabled for many years at Bethesda Lutheran Home in Watertown, Wisconsin, and in Appleton.

Funeral services will be at 11:00 a.m. on Tuesday, January 27, 2004, at ST. PAUL EV. LUTHERAN CHURCH, 302 North Morrison Street, Appleton, with Rev. Ralph C. Waack officiating. Friends may call directly at the church on Tuesday from 9:30 a.m. until the time of services. Interment will be in Highland Memorial Park, Appleton. In lieu of flowers, memorials may be directed to St. Paul Ev. Lutheran Church, Fox Valley Lutheran High School or Agape of Appleton.
WICHMANN FUNERAL HOME
537 North Superior Street
Appleton 920-739-1231
www.wichmannfuneralhomes.com

‚ÄúBe thou faithful unto death, and I will give thee the crown of life.‚Äù Rev. 2:10