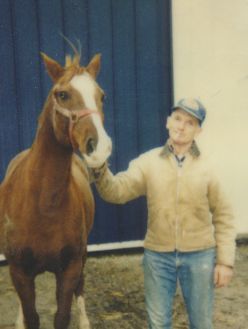 Clarence Wittlin, age 90, of Black Creek, passed away peacefully surrounded by his family at home on Monday, January 26, 2015. Clarence was born to the late Edward and Cecilia (Deacy) Wittlin on October 28, 1924. He graduated from Appleton West high school and joined the Army where he served his Country. Clarence was united in marriage to the late Beatrice Alsteen in 1954.

Clarence enjoyed spending time outside on the farm, where he made his living in dairy and grain. He enjoyed playing his guitar and singing. He also had a passion for anything that had to deal with country and western. One of his greatest passions was that of horse riding. He owned many horses throughout his life and never lost his love for them.

Funeral services will be held at 11:00 a.m. on Thursday, February 5, 2015 at ST. PATRICK CATHOLIC COMMUNITY – STEPHENSVILLE, N3686 State Road 76, Hortonville. Friends may call from 9:30 until the time of services. In lieu of flowers, a memorial fund is being established in Clarence's name.

The family would like to extend a sincere thank you to: the staff of Affinity Hospice (especially Kristin), Pastor Cliff Mast from Affinity Hospice, and Dennis and the entire staff from Home Helpers.