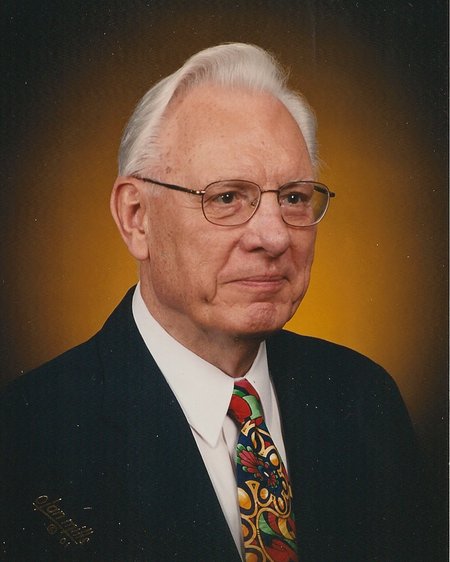 Chez was born October 10th, 1921 near Abbotsford WI, to the late Edwin and Myrtle (Voigt) Hoeft. He was baptized in the Town of Holton and confirmed in 1934 at Christ Lutheran Church in Abbotsford, WI. He graduated from Wausau Business College, where he met and married Doris Ann Bowers of Mellen, WI on May 19th, 1945. Chez worked as an accountant for Marathon Paper Mills in Rothchild, WI and Marathon Corp/American Can Corp in Menasha, WI, transferring to Appleton in 1950. The Hoeft family joined Faith Lutheran Church in Oct 1950 and was very active in many areas, including ushering for many years, which Chez really enjoyed. After 30 years as an accountant, Chez changed professions at the age of 52 to work in sales. He became a District Representative for Aid Association for Lutherans, and was very successful working in the Krueger Agency in Appleton and DePere, retiring in Nov 1987. In retirement, he started 'Chez Hoeft Insurance' until 1994 and then worked as a “greeter” in the Appleton downtown mall. He volunteered for Appleton Medical Center and the American Red Cross; was a member of Appleton Noon Lions Club for 20+ years receiving the Melvin John Award in 2002. He was a life member of the Appleton Jaycees, Assistant Scoutmaster for the Boy Scouts, and a member of various business and social clubs. He and Doris had loads of fun dancing, getting together with friends, and attending Packer games. Chez's leadership and character was respected by many and was an inspiration to all of us. He always gave a strong, warm handshake upon greeting people and truly enjoyed the lifelong friendships he made along the way.

A memorial service will be held at 11:00 a.m. on Saturday, June 5, 2010 at Faith Lutheran Church, 601 E. Glendale Ave., Appleton, WI with the Rev. Paul Brinkman officiating. Friends will be received at the church from 9:30 a.m. until the time of the service. The committal will be held at a later date. In lieu of flowers, memorials can be made to Faith Lutheran Church for the Radio Ministry or the Appleton Health Care Center.

The family wishes to thank Dr. Jack Anderson, the entire staff at Appleton Health Care Center (including Kay, Dyanne and the Unit 3 staff), and all the wonderful friends that have helped to keep his life full. Any man can be a father, but it takes a special man to be a Dad. It has been our heartfelt honor to call you Dad. We will miss you so. Prost Dad, it's 5 o'clock somewhere!