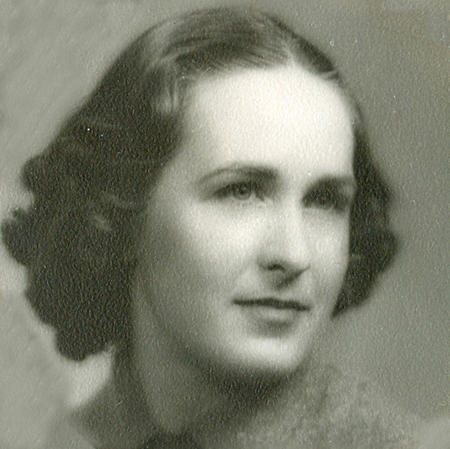 She was born on November 4, 1920 to August and Johanna (Lorenz) Nytes and grew up with six siblings on the family farm on the bank of the Fox River near Wrightstown. She attended a one room country school nearby. Although circumstances only allowed her to complete grade 8, she was an intelligent, creative woman and wrote in her memoirs “Learning is a process that goes on all your life.”

On July 22, 1943 she married Allen Rademacher at St. Francis in Hollandtown, and began the busy life of a farmwife, raising six children. She loved to tell the story of living in their garage for five months in 1952 with four small children, while their farmhouse was torn down and a new one built.

When the kids were old enough, Clara found time to take up oil painting, which she loved. She was also an excellent seamstress, knitter and gardener and was a member of the Calumet County Homemakers for many years. She and Allen loved bird watching, canoeing and all of nature. They traveled with family all over the U.S., from the east to west coast, Canada, often to the Gulf States, and one special trip to Hawaii. She also loved to write about their trips and about “the old days,” often getting articles published in local newspapers. She enjoyed corresponding with a pen pal in Australia for over 30 years. Above all she was a loving mother, concerned foremost about the happiness and safety of her children.

The family wished to thank the compassionate staff of Primrose Lane at St. Paul Home. Also the staff of Calumet County Homecare who helped Clara from 1992-2009.

The Funeral liturgy for Clara will be held on Wednesday, December 29, 2010 at ST. KATHERINE DREXEL PARISH, ST. FRANCIS CHURCH (433 County CE) at 11:00 AM with Fr. Jerry Pastors officiating. Friends may call on Wednesday from 10:00 AM until the time of services at the Church. Burial will be in the parish cemetery. In lieu of flowers memorial may be made to St. Paul Elder Services.

For what is it to die but to stand naked in the wind to melt into the sun? And what is it to cease breathing but to free the breath from its restless tides, that it may rise and expand and seek God unencumbered? Only when you drink from the river of silence shall you indeed sing. And when you have reached the mountaintop, then you shall begin to climb. And when the earth shall claim your limbs, then you shall truly dance. Kahlil Gibran