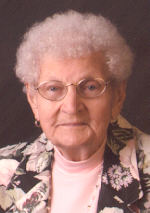 Age 93, passed away at St. Elizabeth Hospital in Appleton on October 21, 2006. She was born in Hollandtown on October 31, 1912, daughter of the late Theodore and Petranella (Verheyen) Barbieur. On August 29, 1933 she married her husband of 73 years, Aloysius Wegand. Clara was a member of St. Mary Catholic Church in Kaukauna and served with the Christian Mothers. Playing sheepshead at St. Paul Villa with her friends was one of her favorite activities.

The funeral liturgy will be at 11:00 a.m. on Tuesday, October 24, 2006 at ST. MARY CATHOLIC CHURCH, 119 W. Seventh St. Kaukauna, with Fr. Jerry Pastors officiating. Friends will be received at the church on Tuesday from 9:00 a.m. until the time of the Mass. Burial will be in Holy Cross Cemetery, Kaukauna.